Physicists at the Technical University of Munich, the Los Alamos National Laboratory and Stanford University (USA) have tracked down semiconductor nanostructure mechanisms that can result in the loss of stored information - and halted the amnesia using an external magnetic field. The new nanostructures comprise common semiconductor materials compatible with standard manufacturing processes.

Quantum bits, qubits for short, are the basic logical elements of quantum information processing (QIP) that may represent the future of computer technology. Since they process problems in a quantum-mechanical manner, such quantum computers might one day solve complex problems much more quickly than currently possible, so the hope of researchers.

In principle, there are various possibilities of implementing qubits: photons are an option equally as viable as confined ions or atoms whose states can be altered in a targeted manner using lasers. The key questions regarding their potential use as memory units are how long information can be stored in the system and which mechanisms might lead to a loss of information.

A team of physicists headed by Alexander Bechtold and Professor Jonathan Finley at the Walter Schottky Institute of the Technical University of Munich and the Cluster of Excellence Nanosystems Initiative Munich (NIM) have now presented a system comprising a single electron trapped in a semiconductor nanostructure. Here, the electron's spin serves as the information carrier.

The researchers were able to precisely demonstrate the existence of different data loss mechanisms and also showed that stored information can nonetheless be retained using an external magnetic field.

Electrons trapped in a quantum dot

The TUM physicists evaporated indium gallium arsenide onto a gallium arsenide substrate to form their nanostructure. As a result of the different lattice spacing of the two semiconductor materials strain is produced at the interface between the crystal grids. The system thus forms nanometer-scale "hills" - so-called quantum dots.

When the quantum dots are cooled down to liquid helium temperatures and optically excited, a singe electron can be trapped in each of the quantum dots. The spin states of the electrons can then be used as information stores. Laser pulses can read and alter the states optically from outside. This makes the system ideal as a building block for future quantum computers.

Spin up or spin down correspond to the standard logical information units 0 and 1. But, on top of this come additional intermediate states of quantum mechanical up and down superpositions.

However, there is one problem: "We found out that the strain in the semiconductor material leads to a new and until recently unknown mechanism that results in the loss of quantum information," says Alexander Bechtold. The strain creates tiny electric fields in the semiconductor that influence the nuclear spin orientation of the atomic nuclei.

"It's a kind of piezoelectric effect," says Bechthold. "It results in uncontrolled fluctuations in the nuclear spins." These can, in turn, modify the spin of the electrons, i.e. the stored information. The information is lost within a few hundred nanoseconds.

In addition, Alexander Bechthold's team was able to provide concrete evidence for further information loss mechanisms, for example that electron spins are generally influenced by the spins of the surrounding 100,000 atomic nuclei.

"However, both loss channels can be switched off when a magnetic field of around 1.5 tesla is applied," says Bechtold. "This corresponds to the magnetic field strength of a strong permanent magnet. It stabilizes the nuclear spins and the encoded information remains intact."

"Overall, the system is extremely promising," according to Jonathan Finley, head of the research group. "The semiconductor quantum dots have the advantage that they harmonize perfectly with existing computer technology since they are made of similar semiconductor material." They could even be equipped with electrical contacts, allowing them to be controlled not only optically using a laser, but also using voltage pulses.

The research was funded by the European Union (S3 Nano and BaCaTeC), the US Department of Energy, the US Army Research Office (ARO), the German Research Foundation DFG (Cluster of Excellence Nanosystems Munich (NIM) and SFB 631), the Alexander von Humboldt Foundation as well as the TUM Institute for Advanced Study (Focus Group Nanophotonics and Quantum Optics). 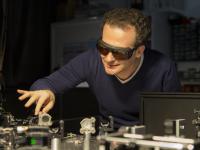