Conservation scientists have demonstrated a new technique to non-invasively survey tigers using their scent sprays, which are detected much more frequently in the wild than scat--the "breadcrumb" that researchers have traditionally used to track the endangered animals. The findings, published this week in the journal Conservation Genetics Resources, show that DNA taken from tiger spray is just as good or even better than scat DNA in identifying individual tigers and their gender, and have the potential to increase the power of conservation surveys and management. It is the first time a technique has been developed specifically for the use of sprays in genetic analysis.

"Genetic monitoring of tiger source populations is a conservation priority," said Anthony Caragiulo, a postdoctoral researcher in the American Museum of Natural History's Sackler Institute for Comparative Genomics. "The utility of this new method is really impactful because it will let us dramatically build upon the number of tigers that can be surveyed and, consequently, increase our understanding of these elusive animals--hopefully before they are gone."

Despite intense conservation efforts, there are fewer than 3,200 tigers (Panthera tigris) in the wild, living in less than seven percent of their historical range. When a population is confined to small islands of wilderness, as are tigers, there is a higher risk of inbreeding and loss of genetic diversity, leaving the species with weaker young. To combat this, the Museum has been working with the global wild-cat conservation organization Panthera to establish "genetic corridors" that allow tigers to seek new territory for prey and new populations for breeding. "Tracking" individual cats using genetic markers lets researchers map movement within and between populations.

Genetic tracking has traditionally relied on extracting DNA from scat collected in the wild. But in humid, tropical landscapes--like those in Sumatra, where a number of tigers live--scat often degrades before researchers can find it. Scent sprays left by tigers on trees and overhanging leaves degrade less quickly, and can be detected by researchers between two and eight times as frequently as scat. So, to boost the effectiveness of genetic monitoring of tigers in warm regions, the research team questioned whether DNA could be extracted from sprays.

"We recently spent weeks looking for tiger scat in the field with very little luck," said Rob Pickles, monitoring specialist for Panthera. "Although this new spray technique wouldn't replace scat studies entirely, we now know that we can use both methods in conjunction to drastically increase our monitoring abilities."

The next step for the researchers is to test the technique in the field, where it also could be used to monitor other scent-spraying animals, like lions.

Fieldwork related to this research was supported by Tambling Wildlife Nature Conservation, in Sumatra, and the Ministry of Forestry for the Republic of Indonesia.

Panthera, founded in 2006, is devoted exclusively to the conservation of wild cats and their ecosystems. Utilizing the expertise of the world's premier cat biologists, Panthera develops and implements global conservation strategies for the most imperiled large cats - tigers, lions, jaguars, snow leopards, cheetahs, pumas, and leopards. Representing the most comprehensive effort of its kind, Panthera works in partnership with local and international NGOs, scientific institutions, local communities, and governments around the globe. For more on Panthera, visit http://www.panthera.org. 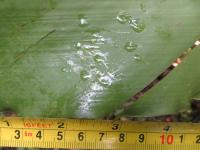