Following the latest research in the field of obtaining single-molecule magnets (SMMs), scientists have taken another step on the way toward obtaining super-dense magnetic memories and molecular neural networks, in particular the construction of auto-associative memories and multi-criterion optimization systems operating as the model of the human brain. Interestingly, this was achieved by using methods available in an average chemical laboratory.

Up to 100 million bits in one square millimetre of magnetic storage devices? Neural networks made out of single molecules? The work carried out by a team led by Lukasz Laskowski from the Department of Molecular Engineering and Nanoelectronics of the Institute of Nuclear Physics of the Polish Academy of Sciences which focuses on the separation of individual particles of molecular magnets brings us closer to achieving these goals.

Until the end of the 1980s, a widely accepted opinion prevailed that ferromagnetic properties are associated with the crystal structure and can only be related to appropriately bulky crystalline matter. However, in 1991, a material made of Mn12O12(OAc)16(H2O)4 molecules, also known as Mn12-stearate, appeared, which contradicted this common belief. It turned out that below a certain temperature this material exhibits ferromagnetic properties. It is worth emphasizing that these magnetic properties did not result from the properties of the crystal structure, as in the case of ferromagnetics, but from the characteristics of a single molecule. That is why materials of this type were called single-molecule magnets (SMMs).

It is not difficult to imagine the application of such compounds, for example in super-dense memory units or elements of neural networks. Therefore, it would seem that single-molecule magnets will quickly become widely used. However, this did not happen. This was probably caused by problems with their separation and obtaining a proper system of individual molecules spaced far enough away from each other that prevented them from affecting each other. Moreover, after obtaining such a system, it was necessary to develop a method for observing molecules as small as 2 nm.

So how can one make the most of the properties of single-molecule magnets? How to arrange individual particles of such material on the substrate so that they do not lose their properties? How to verify the emergence of such a system? Is it necessary to use sophisticated technologies for this purpose?

The basic assumption of the project was to obtain separated single-molecule magnets on a magnetically neutral substrate and to directly observe such molecules without the use of advanced laboratory techniques. The priority was the subsequent use of the developed procedures for commercial applications. After choosing the characteristics of the material in terms of physicochemical and mechanical characteristics, and molecular structure, it was necessary to develop a synthesis procedure in such a way that the atoms would expectedly arrange themselves, creating the desired nanomaterial. Then, the researchers had to choose a single-molecule magnet, a substrate (matrix), the type of anchoring molecules on the surface of the substrate, the way to control their distribution and the distance between them, and methods for direct observation of such molecules.

At the stage of selecting possible types of single-molecule magnets, the Mn12-stearate compound was recognized as the most promising. This particle has a high ground-state spin S = 10 and, therefore, a strong magnetic moment. Due to some modifications, the soluble form of Mn12-stearate was obtained, which additionally proved to be more resistant to atmospheric impact.

When considering the type and form of the medium used, the scientists took into account the aspect of observation of the obtained material. Explicit confirmation of the success would be the direct observation of Mn12-stearate molecules on the surface of the matrix. However, this was difficult due to their small size of only about 2 nm. The solution turned out to be the application of spherical silica. Single-molecule magnets were deposited on spherical silica particles with a diameter of approximately 300 nm. With the spherical shape and relatively small size of such a substrate, they could be clearly observed using transmission electron microscopy (TEM). In particular, the team focused on observing the very horizon (periphery) of such a sphere and detecting the single-molecule magnets anchored to it (Figs 1 and 2).

The surface of the silica chosen as the substrate for the deposition of magnetic molecules has numerous hydroxyl groups, which can then be altered into anchoring units. The method of anchoring the molecules depends on attaching butyl-nitrile groups to the surface hydroxyl units and then transformed into propyl carboxyl groups by hydrolysis. These, in turn, easily capture and immobilize individual Mn12-stearate molecules. The problem of controlling anchor distribution was overcome, however, with the help of spacer units, which allows for monitoring of the distribution of anchoring units during synthesis.

The materials were synthesized in the laboratory of the Department of Molecular Engineering and Nanoelectronics of the Institute of Nuclear Physics of the Polish Academy of Sciences. The work involving the materials has been carried out since 2018. The substances obtained were tested with regards to structural properties using TEM microscopy and vibrational spectroscopy. Magnetic properties were determined using SQUID magnetometry.

The obtained results directly prove that the research group managed to place individual magnetic particles on the silica surface. The procedure is robust, repeatable, and uncomplicated, therefore it can be used by scientific and industrial units fitted out with average equipped laboratories. Besides, a very simple method of direct observation of tiny molecules deposited on a silica substrate was implemented--Mn12-stearate molecules were clearly visible, especially near the horizon of spherical silica using TEM microscopy. No one has ever applied this procedure before. An equally important research achievement proved to be the observation that single-molecule magnets retain their properties, even when separated from each other and embedded on the substrate. In addition, it was possible to determine the way of anchoring magnetic molecules depending on the concentration of anchoring units.

The results obtained are very important and encourage further work on this type of material. Currently, the team is working on analyzing the detailed results of magnetic measurements for the substances described here as a function of the concentration of Mn12-stearate molecules. The scientists are also investigating the durability of the nanocomposites fabricated. The next step will be the regularization of the obtained systems. Currently, the distance between magnetic molecules is regulated statistically, but ultimately, Mn12-stearate single-molecule magnets are to be arranged on the substrate in a regular hexagonal configuration. This will be possible with the use of mesoporous silica with an ordered structure of channels in the form of a thin film and precise multi-stage functionalization of the substrate.

Obtaining and observing single-molecule magnets on the silica surface 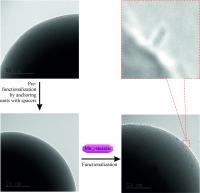 Steps of the Synthesis