Genome sequencing is a milestone in modern biology as it allows access to the entire "list of instructions" (the chemical sequence of genetic makeup) for the development and function of organisms. Sequencing the genome is a bit like writing down the exact order of the colour of beads in a necklace: knowing how they are arranged along the thread gives us no indication as to the shape of the necklace. The shape of the DNA strand can be highly complex, given that the chromosomes are loosely arranged in an apparently chaotic tangle in the cell nucleus. Since the shape of chromosomes may have a decisive effect on their function, it is important that it should be characterised, in part because scientists think the DNA tangle in the nucleus is only apparently chaotic and that it has instead a specific "geography" for each tissue and stage of cell life.

"Arriving at a precise description of the shape of the DNA tangle is unfortunately incredibly complicated", explains Cristian Micheletti, SISSA professor and coordinator of the new study. "In our case, we used experimental data on 'proximity pairs'".

"Imagine having to create a map of a city", he explains, "based only on information like 'the post office is opposite the station', 'the chemist is close to the gym', 'the fruit and vegetable market is near the football field' and so on. If you have only a small number of such statements to go by, your map will be approximate and in some cases indeterminate. But if you have hundreds, thousands or even more, then your map will become increasingly precise and accurate. This is the logic we followed".

"Proximity pairs" therefore refers to information on the closeness of two points on the map. In the case of nuclear DNA, this information was provided by a technique (which Micheletti defines as "brilliant") known as Hi-C, developed by North American research groups in 2010. In this chemical-physical technique, bits of genome located close to each another in the nucleus are tied together and then identified by their sequence. By collecting large numbers of these proximity pairs scientists discovered which points of the chromosomes lie close to each other in the nucleus. While this is today the most powerful technique for investigating DNA organisation in the nucleus, it is still inadequate for inferring its overall shape. "For this reason, we thought we would try to go 'further'", comments Micheletti. 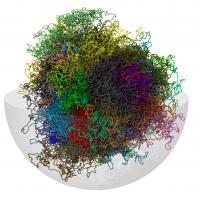 Chromosomes in Cell Nucleus (1 of 2)