5000 years before the modern rise of millet as a popular grain, this Chinese crop was spread far and wide by ancient food aficionados, not for their plates but instead for their animals, suggests new research from an international collaboration led by Kiel University (Germany) and Washington University in St. Louis (USA).

At the newly discovered Dali settlement, ancient DNA from the skeletal remains of sheep and goats show that animals first domesticated in the Near East had reached eastern Kazakhstan by 2700 BC. Stable isotope analysis illustrates that these animals were fed millet spreading westward from its center of domestication in China to help them survive the punishingly cold winters of Inner Asia.

"A thriving pastoralist economy using Chinese millets at 2700 BC is a massive leap forward in understand the earliest food globalization processes in Eurasia," said Taylor Hermes, lead author of the study in Proceedings of the Royal Society B, who is a post-doctoral researcher at Kiel University.

"This is quite an early date for domesticated animals to be present in Inner Asia, and it is also the earliest dated evidence so far of millets spreading out of China. This raises the intriguing possibility that sheep and goat, originally domesticated in the Near East 10,000 years ago, helped move crops of both East Asian and, possibly, Near Eastern origins across the steppe."

The spread of domesticated plants and animals through the vast steppe grasslands of Inner Asia during the Bronze Age marked the beginning of the ancient trade routes that later formed Asia's Silk Roads. However, the exact timing of moving crops through this continental crossroads and the case for farming has remained elusive.

"Our previous research showed archaeobotanical remains of both wheat and millet in human burials around 2300 BC in the highlands of Kazakhstan at the Begash site, but there was not concrete evidence to show whether these were trade items or farmed locally," said Michael Frachetti of Washington University Arts & Sciences, who is a co-author and co-director of the underlying archaeological fieldwork.

The study draws upon excavations and museum collections as part of a longstanding scientific partnership between Washington University, led by Frachetti, and the Margulan Institute of Archaeology in Almaty, Kazakhstan. "Until the discovery of the Dali settlement and this research, we were left to speculate about the integration of intensive farming among Early Bronze Age herders in the region, and whether these grains made it into their diet," he said.

Millet has a distinct carbon isotopic 'signature' that distinguishes it from other crops such as wheat and barley. Consequently, evidence of millet consumption can be traced in the isotope ratios of human bones, but such skeletal remains dating to the third millennium BC are exceedingly rare.

"One way around this problem is to examine the stable isotopes of livestock, which offers a direct window into what and when people fed their animals in the past," says Cheryl Makarewicz, who leads the Archaeological Stable Isotope Laboratory at Kiel University and is senior author of the study.

"Modern pastoralists living in harsh environments such as those where Dali and Begash are located typically give their animals fodder in order to ensure their survival through the winter. The leaves and straw of crops are a great fodder source, and the isotopic composition of ancient sheep and cattle at these sites show the scale of millet cultivation was large enough to provide for animals throughout the winter months," Makarewicz said.

"We also see a wide range of variation in the intensity of this millet foddering strategy, showing a large degree of flexibility in food production," Hermes said. "People who lived at Dali and Begash were shifting their herding and farming strategies year-to-year depending on environment or social circumstances, which gave them critical advantages in ensuring their food security."

This study clearly links the westward dispersal of millets -- a key indigenous crop of Chinese civilization -- to livestock herding by pastoralists who used farming to enhance their animal-focused worlds.

"Millet was a prized crop for keeping healthy herds and, in essence, for being a better pastoralist," Hermes said.

Excavation of the Dali Settlement in Southeastern Kazakhstan 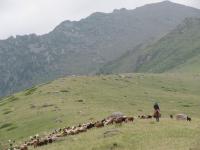 Herding Sheep and Goat in the Dzhungar Mountains of Kazakhstan c. 2011