Tiny soil microbes are among the world's biggest potential amplifiers of human-caused climate change, but whether microbial communities are mere slaves to their environment or influential actors in their own right is an open question. Now, research by an international team of scientists from the U.S., Sweden and Australia, led by University of Arizona scientists, shows that a single species of microbe, discovered only very recently, is an unexpected key player in climate change.

The findings, published in the journal Nature, should help scientists improve their simulations of future climate by replacing assumptions about the different greenhouse gases emitted from thawing permafrost with new understanding of how different communities of microbes control the release of these gases.

Earlier this year, the international team discovered that a single species of microbe, previously undescribed by science, was prominent in permafrost soils in northern Sweden that have begun to thaw under the effect of globally rising temperatures. Researchers suspected that it played a significant role in global warming by liberating vast amounts of carbon stored in permafrost soil close to the Arctic Circle in the form of methane, a powerful greenhouse gas trapping heat in the Earth's atmosphere. But the actual role of this microbe — assigned the preliminary name Methanoflorens stordalenmirensis, which roughly translates to "methane-bloomer from the Stordalen Mire" — was unknown.

The new research nails down the role of the new microbe, finding that the sheer abundance of Methanoflorens, as compared to other microbial species in thawing permafrost, should help to predict their collective impact on future climate change.

"If you think of the African savanna as an analogy, you could say that both lions and elephants produce carbon dioxide, but they eat different things," said senior author Scott Saleska, an associate professor in the UA's Department of Ecology and Evolutionary Biology and director of the UA's new Ecosystem Genomics Institute. "In Methanoflorens, we discovered the microbial equivalent of an elephant, an organism that plays an enormously important role in what happens to the whole ecosystem."

Significantly, the study revealed that because of these microbial activities, all wetlands are not the same when it comes to methane release.

"The models assume a certain ratio between different forms, or isotopes, of the carbon in the methane molecules, and the actual recorded ratio turns out to be different," said lead author Carmody McCalley, a scientist at the Earth Systems Research Center at the University of New Hampshire who conducted the study while she was a postdoctoral researcher at UA. "This has been a major shortcoming of current climate models. Because they assume the wrong isotope ratio coming out of the wetlands, the models overestimate carbon released by biological processes and underestimate carbon released by human activities such as fossil-fuel burning."

Soil microbes can make methane two different ways: either from acetate, an organic molecule that comes from plants, or from carbon dioxide and hydrogen.

"Both processes produce energy for the microbe, and the microbe breathes out methane like we breathe out carbon dioxide," McCalley said. "But we find that in thawing permafrost, most methane initially doesn't come from acetate as previously assumed, but the other pathway. This ratio then shifts towards previous estimates as the frozen soils are turned into wetlands and acetate becomes the preferred carbon source."

One of the big questions facing climate scientists, according to Saleska, is how much of the carbon stored in soils is released into the atmosphere by microbial activity.

"As the 'global freezer' of permafrost is failing under the influence of warming, we need to better understand how soil microbes release carbon on a larger, ecosystem-wide level and what is going to happen with it," he said.

Said UA co-author Virginia Rich: "For years, there's been a debate about whether microbial ecology 'matters' to what an ecosystem collectively does — in this case, releasing greenhouse gases of different forms — or whether microbes are just slaves to the system's physics and chemistry. This work shows that microbial ecology matters to a great degree, and that we need to pay more attention to the types of microbes living in those thawing ecosystems."

Added McCalley: "By taking microbial ecology into account, we can accurately set up climate models to identify how much methane comes from thawing permafrost versus other sources such as fossil-fuel burning."

The paper was co-authored by: Richard Wehr in the UA's Department of Ecology and Evolutionary Biology; Eun-Hae Kim in the UA Department of Soil, Water and Environmental Science; Gene Tyson, Ben Woodcroft and Rhiannon Mondav of the University of Queensland in Brisbane, Australia; Suzanne Hodgkins and Jeffrey Chanton of Florida State University; and Patrick Crill at the University of Stockholm, Sweden.

The research was supported by the Department of Energy Office of Biological and Environmental Research through awards DE-SC0004632 and DE-SC0010580, and by the UA Technology and Research Initiative Fund through the Water, Environmental and Energy Solutions initiative.

The paper 'Methane dynamics regulated by microbial community response to permafrost thaw' has been scheduled for publication in Nature on 23 October 2014. 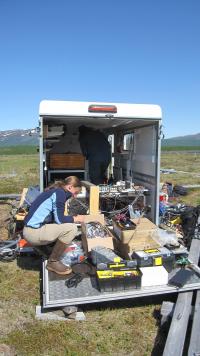 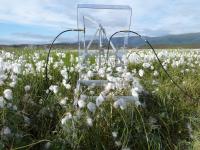