DURHAM, N.C. -- A U.S. and Korean research team has developed a chip-like device that could be scaled up to sort and store hundreds of thousands of individual living cells in a matter of minutes. The system is similar to a random access memory chip, but it moves cells rather than electrons.

Researchers at Duke University and Daegu Gyeongbuk Institute of Science and Technology (DGIST) in the Republic of Korea hope the cell-sorting system will revolutionize research by allowing the fast, efficient control and separation of individual cells that could then be studied in vast numbers.

"Most experiments grind up a bunch of cells and analyze genetic activity by averaging the population of an entire tissue rather than looking at the differences between single cells within that population," said Benjamin Yellen, an associate professor of mechanical engineering and materials science at Duke's Pratt School of Engineering. "That's like taking the eye color of everyone in a room and finding that the average color is grey, when not a single person in the room has grey eyes. You need to be able to study individual cells to understand and appreciate small but significant differences in a similar population."

The study appears online May 14 in Nature Communications.

Yellen and his collaborator, Cheol Gi Kim of DGIST, printed thin electromagnetic components like those found on microchips onto a slide. These patterns create magnetic tracks and elements like switches, transistors and diodes that guide magnetic beads and single cells tagged with magnetic nanoparticles through a thin liquid film.

Like a series of small conveyer belts, localized rotating magnetic fields move the beads and cells along specific directions etched into a track, while built-in switches direct traffic to storage sites on the chip. The result is an integrated circuit that controls small magnetic objects much like the way electrons are controlled on computer chips.

In the study, the engineers demonstrate a 3-by-3 grid of compartments that allow magnetic beads to enter but not leave. By tagging cells with magnetic particles and directing them to different compartments, the cells can be separated, sorted, stored, studied and retrieved.

In a random access memory chip, similar logic circuits manipulate electrons on a nanometer scale, controlling billions of compartments in a square inch. But cells are much larger than electrons, which would limit the new devices to hundreds of thousands of storage spaces per square inch.

But Yellen and Kim say that's still plenty small for their purposes.

"You need to analyze thousands of cells to get the statistics necessary to understand which genes are being turned on and off in response to pharmaceuticals or other stimuli," said Yellen. "And if you're looking for cells exhibiting rare behavior, which might be one cell out of a thousand, then you need arrays that can control hundreds of thousands of cells."

As an example, Yellen points to cells afflicted by HIV or cancer. In both diseases, most afflicted cells are active and can be targeted by therapeutics. A few rare cells, however, remain dormant, biding their time and avoiding destruction before activating and bringing the disease out of remission. With the new technology, the researchers hope to watch millions of individual cells, pick out the few that become dormant, quickly retrieve them and analyze their genetic activity.

"Maybe then we could find a way to target the dormant cells," said Yellen.

Kim added, "Our technology can offer new tools to improve our basic understanding of cancer metastasis at the single cell level, how cancer cells respond to chemical and physical stimuli, and to test new concepts for gene delivery and metabolite transfer during cell division and growth."

The researchers now plan to demonstrate a larger grid of 8-by-8 or 16-by-16 compartments with cells, and then to scale it up to hundreds of thousands of compartments. If successful, their technology would lend itself well to manufacturing, giving scientists around the world access to single-cell experimentation.

"Our idea is a simple one," said Kim. "Because it is a system similar to electronics and is based on the same technology, it would be easy to fabricate. That makes the system relevant to commercialization."

"There's another technique paper we need to do as a follow-up before we get to actual biological applications," added Yellen. "But they're on their way."

This research was supported by the National Science Foundation (CMMI-0800173), and the Research Triangle Materials Research Science and Engineering Center (DMR-1121107) and the National Research Foundation of Korea funded by the Ministry of Science, ICT & Future Planning (NRF-2013R1A1A2065222). 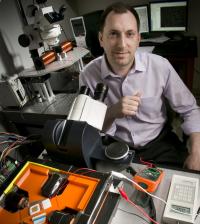