LA JOLLA--(December 21, 2017) The process by which embryonic stem cells develop into heart cells is a complex process involving the precisely timed activation of several molecular pathways and at least 200 genes. Now, Salk Institute scientists have found a simpler way to go from stem cells to heart cells that involves turning off a single gene.

The work, which appears in Genes & Development on December 21, 2017, offers scientists a streamlined method to arrive at functioning heart cells (cardiomyocytes) for both research and regenerative therapies.

"This discovery is really exciting because it means we can potentially create a reliable protocol for taking normal cells and moving them very efficiently from stem cells to heart cells," says Salk Professor Kathy Jones, the senior author of the paper. "Researchers and commercial companies want to easily generate cardiomyocytes to study their capacity for repair in heart attacks and disease--this brings us one step closer to being able to do that."

In 2015, Jones' lab, which studies proteins that manage cell growth and development, discovered that two different cellular processes cooperate to enable embryonic stem cells (ESCs) to develop into specific cell types like pancreas, liver and heart. The team found that the Wnt pathway loads up the cellular machinery to begin copying and activating genes, and then the Activin pathway ramps up that activity many fold. Together, the two pathways (named for key proteins) direct stem cells to an intermediate stage from which they further progress into cells of specific organs. By exposing the cells to a signaling molecule at two different timepoints, the team could trigger first Wnt, then Activin, and end up with specialized cells.

In the process of their experimentation, the team also discovered a third pathway--governed by a protein called YAP--which seemed to put the brakes on the Activin pathway, thereby keeping stem cells from specializing.

Wanting to better understand this effect, in the current work Jones and first author Conchi Estarás set out to manipulate the YAP gene in various ways to see what would happen. They began by using the molecular scissors known as CRISPR-Cas9 to cut the gene out of ESCs' DNA so they could no longer make the YAP protein. Then the duo exposed the cells to the signaling molecule to see what, if anything, happened.

To their great surprise, the cells went from the stem cell stage directly to beating heart cells.

"Instead of requiring two steps to achieve specialization, removing YAP cut it to just one step," says Estarás, who is a Salk research associate. "That would mean a huge savings for industry in terms of reagent materials and expense."

Intriguingly, further analysis revealed that the same genes were being turned on as would be activated via the normal Wnt-Activin stem-cell specialization process.

"This revealed to us a hidden, specific cellular lineage directly to beating cardiomyocytes," says Jones. "It's both fascinating and medically and commercially useful to find genes that are differently regulated still lead to the same result."

Because removing a gene entirely can have unintended effects, the team next wants to test whether they can turn off the YAP gene using small commercially available inhibitor molecules, and still derive functioning cardiac cells from stem cells.

Other authors included Hui-Ting Hsu and Ling Huang of Salk.

Getting straight to the heart of the matter in stem cells 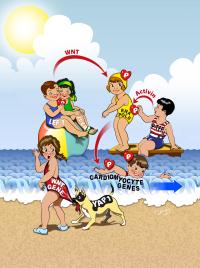