BLOOMINGTON, Ind. - Indiana University biologists believe they have found a faster, cheaper and cleaner way to increase bioethanol production by using nitrogen gas, the most abundant gas in Earth's atmosphere, in place of more costly industrial fertilizers. The discovery could save the industry millions of dollars and make cellulosic ethanol - made from wood, grasses and inedible parts of plants - more competitive with corn ethanol and gasoline.

The raw materials for cellulosic ethanol are low in nitrogen, a nutrient required for ethanol-producing microbes to grow, so cellulosic ethanol producers are estimated to spend millions of dollars annually on nitrogen fertilizers like corn steep liquor and diammonium phosphate. But an IU team led by biologist James B. McKinlay has found that the bioethanol-producing bacterium Zymomonas mobilis can use nitrogen gas (N2) as a nitrogen source, something that the more traditional ethanol-producer, baker's yeast, cannot do.

The largest cost contributors to cellulosic ethanol production are the cellulosic plant material and the enzymes needed to degrade the plant material into sugars that are converted into ethanol, so they have received the most attention.

"But we recognized nitrogen fertilizers as a smaller, yet considerable, cost contributor that could potentially be more readily addressed," he said.

They estimated that using N2 gas, which can be produced on-site at production facilities, in place of costly nitrogen supplements could save an ethanol production facility over $1 million dollars a year. Using N¬2 gas could also have environmental benefits such as avoiding carbon dioxide emissions associated with producing and transporting the industrial fertilizers.

"More work needs to be done to assess how this approach can be integrated and optimized on an industrial scale, but all of the data we've collected thus far are very encouraging," McKinlay said.

A provisional patent has also been filed in relation to the study with the United State Patent and Trademark Office, he added.

The research was published today in the journal Proceedings of the National Academy of Sciences by McKinlay and three past and present members of his laboratory: graduate student Timothy A. Kremer, postdoctoral fellow Breah LaSarre, and former research associate Amanda L. Posto. McKinlay is an assistant professor in the IU Bloomington College of Arts and Sciences' Department of Biology.

Funding for the research was provided by an Oak Ridge Associated Universities Ralph E. Powe Junior Faculty Enhancement Award, the U.S. Department of Energy grant through the Office of Science Biological and Environmental Research program[JM5] mentioned above, and by the College of Arts and Sciences at IU. 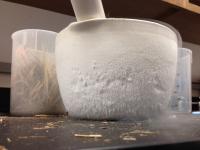