Common swifts are known for their impressive aerial abilities, capturing food and nest material while in flight. Now, by attaching data loggers to the birds, researchers reporting in the Cell Press journal Current Biology on October 27 have confirmed what some had suspected: common swifts can go for most of the year (10 months!) without ever coming down.

While there had been examples of birds remaining in flight for periods of months, including frigate birds and alpine swifts, the evidence on common swifts sets a new record, the researchers say.

"When the common swifts leave their breeding site in August for a migration to the Central African rainforests via West Africa, they never touch ground until they return for the next breeding season 10 months later," says Anders Hedenström of Lund University in Sweden. "Some individuals may roost for brief periods, or even entire nights in mid-winter, but others literally never landed during this period."

Hedenström says the birds likely save energy during the day by gliding in upward currents of warm air. But they also ascend to high altitudes each day at dawn and dusk.

Scientists had long ago proposed that swifts might spend most of their lives in flight. To find out, Hedenström and colleagues developed a new type of micro data logger. The data loggers record acceleration to monitor the birds' flight activity. Later, the researchers added light sensors for use in geolocation. The researchers attached the data loggers to 19 common swifts that were later recaptured.

The data showed that swifts spend more than 99 percent of their time during their 10-month non-breeding period in flight. While some individuals settled down at some point, others never did. The birds' flight activity often appeared lower during the day than at night, most likely because the birds spent their days soaring on warm air currents.

Hedenström says the researchers don't yet know whether or how the birds sleep. But, "the fact that some individuals never landed during 10 months suggests they sleep on the wing." Perhaps they find time to nap during slow descents at dawn and dusk, he suggests. That's one possibility he and his colleagues hope to explore in future research.

Despite the high energetic costs associated with all that flight, common swifts also manage to live surprisingly long lives, contrary to popular notions about living hard and dying young. There are documented cases of common swifts living to the age of 20.

In that time, "the accumulated flight distance equals seven round-trip journeys to the moon," Hedenström says. And that, he says, means there are many more intriguing questions to ask and answer about the birds' physiology.

For 10 months out of the year, common swifts live in mid-air 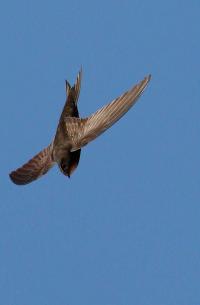