Using recent advances in genetic sequencing technology, researchers have significantly improved upon previous assemblies of the gorilla genome. In order to better understand human biology and genetic variation, it's important to have complete, high-quality data of the genomes of our closest relatives, non-human primates. The first full gorilla genome was sequenced in 2012. However, the old genome contains more than 400,000 sequence gaps, and previous genome assembly methods resulted in some inaccurate genetic structuring. Here, David Gordon et al. used long-read sequencing technology, along with a unique combination of algorithms, to reconstruct a much more accurate gorilla genome, using DNA isolated from a Western lowland gorilla named Susie at the Lincoln Park Zoo in Chicago. Compared with a previous gorilla genome assembly (gorGor3), this new assembly (Susie3) has a 96% reduction in contigs, short sequences that may lack information of their location within the genome. As well, the authors say that they have closed 94% of the 433,861 sequence gaps that were in the gorGor3 genome. The team used short read sequences from six other Western lowland gorillas in order to get a better understanding of genetic variation among this species. Comparison of Susie3 and human genome assemblies revealed a total of 117,512 insertions and deletions and 697 inversion variants. More than 86% of these events were previously unidentified. These results provide a better understanding of genetic variation between our species and our non-human cousins, but also demonstrate ways to sequence other mammalian genomes with better accuracy.

A more accurate understanding of the gorilla genome 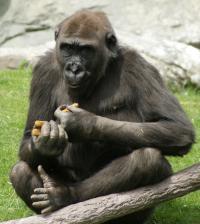 A More Accurate Understanding of the Gorilla Genome (2 of 2)