In the course of every single cell division, the genetic information on the chromosomes must be distributed equally between the newly developing daughter cells. The enzyme separase plays a decisive role in this process. Susanne Hellmuth and Olaf Stemmann from the Chair of genetics at the University of Bayreuth have now discovered a previously unknown mechanism that regulates the activity of the separase. These fundamental findings add a new aspect to our current understanding of chromosome inheritance. The scientists have presented their study in the journal "Nature".

Crucial for healthy cell development: the regulation of separase

Cell division is essential for human growth and reproduction. Before a cell begins to divide, the genetic information stored on the chromosomes is duplicated. When this process is complete, each chromosome consists of two identical DNA threads, the sister chromatids. Cohesin, a ring consisting of several proteins, encloses each chromosome and holds the pair of chromatids together. Already during preparation for cell division, cohesin is removed from the arms of the chromosomes. However, the complete separation of the sister chromatids can only take place when the cohesin remaining in the middle of the chromosomes is cut by the enzyme separase. The chromatids then migrate to the two opposite ends of the spindle apparatus, where they form the genetic basis of the forming daughter cells.

Healthy development of the daughter cells is only guaranteed if they do not contain genetic defects. In order for this condition to be fulfilled, the separase must become active at exactly the right time. If the sister chromatids are separated too early, they can only be distributed randomly. The resulting daughter cells then contain the wrong chromosome number and die, or they can develop into tumour cells. Only strict regulation of the separase prevents these genetic malfunctions.

The Bayreuth researchers Susanne Hellmuth and Olaf Stemmann, in cooperation with geneticists from the University of Salamanca/Spain, have now discovered that the protein shugoshin (Japanese for "guardian spirit") has exactly this regulating function. Shugoshin causes the separase to remain inactive until the right time for cohesin splitting has come. With this discovery, scientists have succeeded in solving an important puzzle of genetics: Until now, only the protein securin was known to suppress premature activity of the separase. It was therefore believed that the separase was exclusively regulated by securin. However, this view contradicted the observation that separase remains properly regulated even when securin is not present. The study now published in "Nature" provides the explanation: Shugoshin and securin both prevent separase from initiating the process of chromsosome segregation at the wrong time. And if the securin fails, even shugoshin alone is able to regulate the activity of separase in human cells.

"We are dealing with a type of redundancy that is not at all uncommon in the cell cycle: In order for a vital process to proceed in a well-ordered manner, nature has safeguarded it by controlling it simultaneously in two or more different ways. This makes the process particularly robust, but also difficult to study, because individual disturbances have no visible effect," said Susanne Hellmuth, first author of the study.

Dual control through the spindle checkpoint

Indeed, Hellmuth and Stemmann made a further discovery: It is the spindle assembly checkpoint (SAC) that controls the regulating influence of shugoshin as well as that of securin. This finding confirms the well-established assumption in the research that the SAC has, as it were, sovereignty over all processes involved in chromosome inheritance. It had been known for some time that the SAC first stabilizes the securin and does not allow its degradation until the time has come for cohesin splitting by separase. The "Nature" publication now shows how the checkpoint causes shugoshin to suppress the premature activity of separase: namely by associating shugoshin with the SAC component Mad2.

"I was particularly pleased to hear a remark on our publication by one referee that the textbooks will now have to be rewritten," says Olaf Stemmann. "Our further research will show how our fundamental findings could also find their way into cancer therapy." This follow-up study by the Bayreuth research duo will also soon be published in "Nature".

The research work at the University of Bayreuth was funded by the German Research Foundation (DFG). Their research partners in Spain received funding from the Ministry for the Economy and Competitiveness (MINECO) and Junta de Castilla y León. 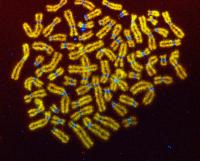