CHAMPAIGN, Ill. — In September, 2007, the Anaktuvuk River Fire burned more than 1,000 square kilometers of tundra on Alaska's North Slope, doubling the area burned in that region since record keeping began in 1950. A new analysis of sediment cores from the burned area revealed that this was the most destructive tundra fire at that site for at least 5,000 years. Models built on 60 years of climate and fire data found that even moderate increases in warm-season temperatures in the region dramatically increase the likelihood of such fires.

The study was published this October in the Journal of Geophysical Research.

After the Anaktuvuk fire, University of Illinois plant biology professor Feng Sheng Hu sought to answer a simple question: Was this seemingly historic fire an anomaly, or were large fires a regular occurrence in the region?

"If such fires occur every 200 years or every 500 years, it's a natural event," Hu said. "But another possibility is that these are truly unprecedented events caused by, say, greenhouse warming."

On a trip to Alaska in 2008, Hu chartered a helicopter to the region of the Anaktuvuk fire and collected sediment cores from two affected lakes. He and his colleagues analyzed the distribution of charcoal particles in these cores and used established techniques to determine the approximate ages of different sediment layers.

The team found no evidence of a fire of similar scale and intensity in sediments representing roughly 5,000 years at that locale.

The researchers then analyzed 60 years of fire, temperature and precipitation records from the Alaskan tundra to determine whether specific climate conditions prevailed in years with significant tundra fires. They developed a model relating the tundra area burned in Alaska each year to the mean temperature and precipitation in the warmest period of the year: June through September.

"There is a dramatic, nonlinear relationship between climate conditions and tundra fires, and what one may call a tipping point," he said. Once the temperature rises above a mean threshold of 10 degrees Celsius (50 degrees Fahrenheit) in the June-through-September time period, he said, "the tundra is just going to burn more frequently."

Higher precipitation, if it occurs, could dampen the effects of higher temperatures, but only to a limited extent, said Philip Higuera, a professor of forest ecology and biogeosciences at the University of Idaho and a co-author on the study.

"As temperature rises, so too does evaporation," he said. "So even if future precipitation increases, it's likely that increased evaporation will result in overall lower moisture availability. This affects plants, but it also makes dead vegetation more flammable and fire prone."

The National Science Foundation and the Joint Fire Science Program supported this study.

The study, "Tundra Burning in Alaska: Linkages to Climatic Change and Sea Ice Retreat," is available online or from the U. of I. News Bureau. 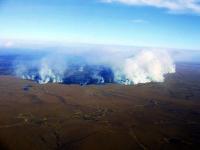