Jumping is an antipredatory adaptation of many water strider species to avoid capture by predators that attack from under the water surface. The Korean-Polish team of biologists, Piotr Jablonski, Sang-Im Lee and Jae Hak Son from the Laboratory of Behavioral Ecology and Evolution (Jablonski, Lee and Son) and the Institute of Advanced Machines and Design (Lee) at the Seoul National University have filmed jumping behavior of the largest water strider species in Korea, Aquarius paludum. Slow-motion movies shot at 1000 fps, showed that the typical jump has two phases. Video of the water strider Aquarius paludum jumping on a solid substrate clearly shows these phases (see the uploaded media "Water strider A paludum jump on solid substrate.wmv"). In the initial phase midlegs mostly press vertically downwards against the water surface. As a result of these leg movements, the water surface is deflected creating a dimple in the initial phase. The dimple is created gradually because the leg speed downwards increases gradually rather than abruptly. In the second phase the legs move rather horizontally, first mostly backwards and then mostly inward with a gradual switch between them. The dimple then moves across the water surface as the legs move backwards and then inward (see the uploaded media "Water strider A paludum jumps on water.wmv" ) during 20-30 milliseconds between the initial phase and the moment when the legs leave the water surface.

Based on the insect morphology and the pattern of the leg movements, the team of theoretical engineers, Ho-Young Kim and Eun-Jin Yang from the Micro Fluid Mechanics Laboratory and the Institute of Advanced Machines and Design at the Seoul National University, created a mathematical model of surface tension forces that make the vertical jump possible (a type of model called "kinematic model"). They estimated a threshold value for the dimple depth below which the legs will break the water surface. Then, they calculated the vertical body speed of a jumping insect resulting from the interactions between legs and water surface. At the heart of these calculations is the fact that each leg of an insect creates a dimple on the water surface (provided it does not break the surface), and that at each moment of time the water strider experiences the upward directed force (component of the surface tension force) from each dimple. The final jumping speed is proportional to the sum of forces acting on all four legs (four dimples) at each moment of time for the duration of jump. This means that the adding of the forces occurs in space (four dimples) and time (along the duration of jump). The upward force at each dimple increases as the dimple depth (strictly speaking volume) increases. But, breaking of the water surface by legs, which occurs after the threshold depth is reached, leads to a loss of the dimple and the upward force. Therefore, the model predicted that the speed-maximizing jumping behavior is to keep the dimple as deep as possible for as long as possible without breaking the surface of water. The theoretical analysis suggested that the water strider's leg movement pattern observed by biologists allows insects to achieve this optimal jumping performance without breaking the water surface (as explained in a video in reference 2).

Inspired by the biological observations and the theoretical understanding, the team of engineers, Kyu-Jin Cho, Je-Sung Koh, Gwang-Pil Jang, and Sun-Pill Jung from the Biorobotics Laboratory and the Institute of Advanced Machines and Design at the Seoul National University, together with Robert J. Wood from the School of Engineering and Applied Sciences and Wyss Institute for Biologically Inspired Engineering at Harvard University, began to design miniature robots. They created a computer model of jumping (a type of model called "dynamic model") helpful in designing a robot that correctly reproduces the physical principle used by water striders in jumping. The new robots correctly imitate the core characteristic of the insect leg movements: initial gradual increase of downward force against the water surface, which creates the water dimple without splashing and without breaking of the water surface, followed by inward movements of the legs on the surface, which causes a shift of the unbroken dimple across the water surface (see movies of robots in reference 1, 2 and 3). Although the robots themselves do not faithfully imitate the look and morphology of the real water striders, the interactions between the robots' legs and the-water surface correctly reproduce the principal mechanism used by jumping insects. Therefore, the robots' performance is comparable to that of the real water striders. They are the first robots that are similar to the larger water strider species in terms of body mass and jump's physics as well as jumping performance. The earlier "water strider robots" that jumped on water did not relay on surface tension, created splashes breaking the water surface, and were much larger than the real water striders (see example in reference 4). None of them was based on as careful observations and understanding of nature as are the robots created by Kyu-Jin Cho, Je-Sung Koh, Gwang-Pil Jang, Sun-Pill Jung and Robert Wood. These robots open exciting new possibilities to test hypotheses about evolution as an optimizing process that creates biological adaptations to jump. For example, in the future one can probably be able to build mini robots that are very similar to the existing water strider species (for example in terms of leg length) and compare them to the robots that are unlike the existing water strider species. If evolution creates morphologies for the best performance then the robots most similar to the real water striders will show the best jumping performance.

Links to the better resolution versions of the movie clips are here: 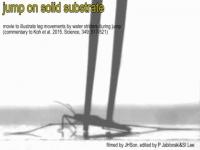 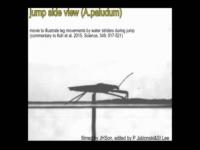