PROVIDENCE, R.I. -- Asteroids and meteorites are supposed to be made of the same stuff – at least that's what earth science teachers have been telling their students for decades. But until re-cently, the data didn't quite fit the story. When researchers compared the near-infrared reflec-tance of asteroids (as measured from Earth) and meteorites (collected on Earth) they found enough differences to raise doubts about whether the asteroids really could be the source of Earth's meteorites.

A detailed new comparison of the near-Earth asteroid Itokawa with existing meteorite samples confirms that the process of space-weathering can explain the difference in reflectance pattern (spectrum) between asteroids and ordinary chondrites, the most common class of meteorites.

"They [chondritic meteorites] are so abundant, there have to be many, many asteroid sources, said Takahiro Hiroi, the paper's lead author, but we couldn't find any that matched so clearly, until now. These observations really let us see space weathering at work."

Over millions of years, the flow of high-energy ions and microscopic particles vaporizes the sur-face of asteroids, depositing a thin film that changes the asteroid's optical properties. Highly-weathered areas tend to appear dark and red. (The near infrared spectrum of such areas is shifted toward the red end of the spectrum.)

Takhiro Hiroi, a senior research associate at Brown University, visited several museums and col-lected dozens of samples of fresh, or newly fallen, meteorites. He rejected many samples because the oxidation caused by rain and air on the Earth's surface changes the rock's composition and interferes with the asteroid comparison. Together with other researchers from the Hayabusa mis-sion, Hiroi compared the near-infrared reflectance spectra of meteorite samples with spectra ob-served at specific locations on the asteroid.

One sample (from a meteorite dubbed Alta'ameem, for the area in Iraq where it fell) resulted in a near-identical match after correction for the changes that result from space weathering. Those changes include a reduction in mean optical path length – usually a sign of smaller grain size -- and an increase in tiny iron particles known as nano-phase metallic iron or npFe0.

Hiroi was able to see the effects of space weathering by taking spectra from one light and one dark area on the asteroid's surface. Matching the observed spectra to that of the Alta'ameem me-teorite, he estimated that the highly-weathered site contained about 0.069 percent nanophase me-tallic iron and the less-weathered site contained about 0.031 percent. Because Alta'ameem is an LL chondrite, a class that represents only 10% of ordinary chondrite meteorites, Hiroi suggests that there must be many asteroids in near Earth orbit with compositions similar to the more-common L- and H-type meteorites.

Evidence of space weathering has been seen before on moons and larger asteroids, but such clear evidence is new for smaller asteroids, such as the 550-meter Itokawa. It had been thought that such bodies, with their smaller gravitational fields, would quickly be stripped of the weathered material. This new evidence shows that space weathered material does accumulate on small as-teroids, which probably are the source of most meteorites. 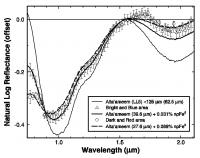