Light cannot be used to image any structures smaller than half its wavelength - for a long time, this was considered to be the ultimate resolution limit in light microscopy. The development of superresolution microscopy, however, showed that there are certain loopholes to this rule. By imaging individual molecules at different points in time, their exact positions can eventually be combined to one clear picture. In 2014, the Nobel Prize in Chemistry was awarded for this idea. Since then, superresolution microscopy techniques, such as STORM and PALM, have become popular methods to study the organization of proteins in the cell membrane.

Surprisingly, many research groups found that virtually all studied proteins form clusters in the cell membrane. During their work on such protein clusters, researchers at TU Wien made an unexpected discovery. Often, the alleged clusters are in fact single blinking molecules, which are counted multiple times. A new method, which the team has now presented in the journal Nature Methods, can distinguish real clusters from such artefacts.

"For many important problems in medicine and biology, it is crucial to understand the structure of the cell membrane", says Florian Baumgart from the biophysics-research team led by Professor Gerhard Schütz at TU Wien. "Superresolution microscopy is an ideal tool to study the spatial arrangement of proteins on the cell membrane. Our research focuses on T cells, which can recognize antigens and therefore play an important role in our immune system."

In order to apply superresolution microscopy to biological samples, proteins are labeled with fluorescent molecules (so called fluorophores). In classical fluorescence microscopy, a single fluorophore is not visible as a clear dot, but as a washed-out circle. Consequently, if all these molecules light up simultaneously, their images overlap and the information about their exact spatial arrangement is lost. Using chemical tricks or special illumination protocols, the fluorophores can be made to light up at different time points. A series of pictures is taken, on each of which only a few well-separated fluorophores are visible. Subsequently, a computer program determines the exact position of the molecules on each image. This finally allows to reconstruct one high-resolution picture from all determined single molecule positions.

"In recent years, various research groups have investigated how proteins are distributed on cell membranes. Again and again they found that almost all proteins form clusters, rather than assuming random positions", says Florian Baumgart.

At first glance, this seems reasonable. It is well known that during antigen recognition, T cells can create stable protein clusters which are large enough to be seen even with classical fluorescence microscopy. Tiny nanoscopic protein clusters were considered to be precursors of these larger structures - with great importance for the function of T cells.

Florian Baumgart had been looking for these nanoclusters too. But superresolution microscopy is a complicated matter with many possible sources of error. The data must be evaluated carefully to obtain reliable results. Sometimes molecules can light up multiple times, which can easily be mistaken for a molecule cluster.

"We thought about how we could distinguish clusters of alternately glowing molecules from a single molecule which blinks repeatedly", says Florian Baumgart. The decisive idea was to vary the concentration of the fluorophores. "In the pictures, clusters and single blinking molecules may be difficult to tell apart, but the statistical properties of the distribution are different, when we increase the fluorophore concentration." If the labeled molecules do form clusters, more and more molecule positions become visible, when increasing amounts of fluorescent markers are used. But between the clusters, dark spaces remain. If, on the other hand, it is randomly distributed molecules lighting up several times, an increasing number of fluorescent molecules will eventually cover the whole surface, without forming clusters in any specific region.

"That way we found out that the membrane proteins we are interested in do not form clusters at all - this theory has to be discarded", says Florian Baumgart. "There are, however, examples of proteins that do indeed form clusters. We could show that pictures of these proteins have quite different statistical properties."

This method of distinguishing clusters from blinking molecules has now been published in the journal "Natures Methods". It is expected to help with the interpretation of superresolution data and might become an important tool to help in the understanding of the plasma membrane's structural organization. 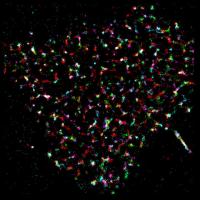 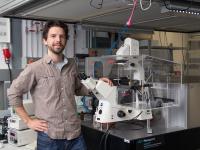