The promotion of healthy eating habits is an important issue across the United States, but research into it has largely been confined to urban areas. But one Drexel professor believes that interventions in the country can reach a significant swath of people.

Drexel University's Ana Martinez-Donate, PhD, and her fellow researchers from the University of Wisconsin-Madison developed a strategy for healthy eating intervention that showed great promise for rural communities by utilizing local supermarkets and restaurants.

Creating Waupaca Eating Smart, or WES, the research team partnered with a local nutrition-promoting coalition in Waupaca, Wisconsin, a town of roughly 6,000, to influence the foods supermarkets and restaurants made available and how they promoted them.

"We think we were very successful in getting people aware of Waupaca Eating Smart," Martinez-Donate said. "Half of the people said they knew about it. And the participating stores and restaurants said they were happy with the results of it."

Most of the research into healthy eating interventions occurs in urban settings, Martinez-Donate said. But rural areas are at a special disadvantage because there are fewer resources available -- like city-sponsored programs and academic institutions --and they tend to have even greater obesity rates. But rural areas have a significant distinction that works in their favor.

"Rural communities are usually tighter," she said. "If you can engage the right stakeholders, you have a bigger impact. Our study had a third of the restaurants in the town. And more came on after the study. The chance to get all of these places on board is that much greater."

The research began in 2010 while Martinez-Donate was a professor at the University of Wisconsin and continues now in her position at Drexel's Dana and David Dornsife School of Public Health. The study's primary focus was measuring the intervention program's feasibility and its reach in the study community.

For the 10-month intervention study, seven restaurants and two supermarkets participated by introducing healthier options to their menus or shelves. For example, some restaurants offered low-calorie meal options and switched out salads with regular dressing for low calorie dressings or unhealthy desserts and sides for fruit cups. In supermarkets, deli items, like side salads, were modified to allow for comparable, but healthier, items.

A large part of the study entailed pushing healthy items through promotional materials or Waupaca Eating Smart materials. The researchers printed special recipes that highlighted healthy ingredients that could be bought in the supermarkets and made for dinner that night.

"We need to make sure there are more healthy options in stores and restaurants, make it more of the norm to order healthier meals because people default to the unhealthy options," Martinez-Donate said.

Once the study's practical phase ended in 2013, surveys indicated that owners of the restaurants expressed a high level of satisfaction (a mean of 3.14 out of possible 4) and a high likelihood to continue the program even after the study implementation phase wrapped up (2.86 mean out of 4).

As she continues to go through the study, Martinez-Donate thinks the impact could be wider if there were "complimentary activities" that went along with the program. Those could include special recreational or educational events focusing on promoting healthy eating habits to increase consumer demand for more nutritious foods.

Although it was conducted in a small, Midwestern town, Martinez-Donate thinks the study proved a point: businesses are open to the change.

"Feasibility is not the issue. This was done," she said. "The next question is what the right dosage for this is and how can you translate this pilot intervention into sustainable, larger-scale initiatives."

A change of stomach: The feasibility of healthy eating campaigns in rural areas 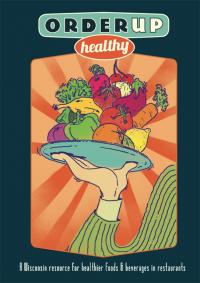