For reef-building corals, sponges do not make good neighbors. Aggressive competitors for space, sponges use toxins, mucus, shading, and smothering to kill adjacent coral colonies and then grow on their skeletons. A recent survey of coral reefs across the Caribbean shows that overfishing removes the predators of sponges, greatly increasing the threat of fast-growing sponges to an already diminished population of corals.

A research team headed by Dr. Joseph Pawlik at UNC Wilmington surveyed reefs from 12 countries across the Caribbean, comparing 25 sites where fish abundance is very low because of decades of intensive fish-trapping with 44 sites where fishes are plentiful because they are protected from fishing. Over 25% of coral colonies at overfished sites were in contact with sponges, more than double the incidence for less-fished reefs. On less-fished reefs, fast-growing sponge species were eaten by angelfishes and parrotfishes, leaving only slow-growing sponge species that are protected from these predators by distasteful chemical defenses.

Corals are particularly threatened on Caribbean reefs, where the combined effects of warming seawater temperatures, storms, and diseases have already decimated populations of these slow-growing creatures. The critical importance of coral reefs for both shoreline protection and fishery habitat has led the United States government to list some reef-building corals under the Endangered Species Act, and the World Conservation Union has included 10 species on its Red List of Threatened Species.

"If the goal is to save the corals that build Caribbean reefs, we have to protect the angelfishes and parrotfishes that eat sponges" says Tse-Lynn Loh, now a Postdoctoral Research Associate at the Haerther Center for Conservation and Research at Chicago's Shedd Aquarium and lead author on the study published today in the open access journal PeerJ. Additionally, the study provides an important validation of ecosystem theory at the community level, with clear indirect effects of overfishing resulting in greater competition between sponges and corals across a broad geographic region.

Corals have more to contend with than just space-stealing sponges. Seaweeds have long been considered the greatest threat to corals on reefs, and the Caribbean-wide survey confirmed that seaweeds cover nearly twice the reef surface as either corals or sponges. But further analysis of the survey data gave an unexpected result: seaweeds were more abundant on reefs where fishes were more numerous. This outcome is contrary to the conventional wisdom that fishes eat seaweeds and keep them in check, a concept that has long been an important justification for protecting reef areas from fishing. Other recent survey studies have reported similar findings, suggesting that the relationship between seaweeds and fishes is more complicated than once imagined. However, for sponges at least, the relationship is clear: overfishing of sponge-eating fishes results in greater sponge overgrowth of corals.

"Caribbean nations can now base their fishing policy decisions on the clear connection between overfishing and sponge-smothered corals." says Pawlik. "Coral conservation requires a healthy population of reef fishes."

PeerJ has an Editorial Board of over 1,000 respected academics, including 5 Nobel Laureates. PeerJ was the recipient of the 2013 ALPSP Award for Publishing Innovation.

For PeerJ: email: press@peerj.com , https://peerj.com/about/press/ Note: If you would like to join the PeerJ Press Release list, visit: http://bit.ly/PressList

Consumer-mediated indirect effects at the community level are difficult to demonstrate empirically. Here, we show an explicit indirect effect of overfishing on competition between sponges and reef-building corals from surveys of 69 sites across the Caribbean. Leveraging the large-scale, long-term removal of sponge predators, we selected overfished sites where intensive methods, primarily fish-trapping, have been employed for decades or more, and compared them to sites in remote or marine protected areas (MPAs) with variable levels of enforcement. Sponge-eating fishes (angelfishes and parrotfishes) were counted at each site, and the benthos surveyed, with coral colonies scored for interaction with sponges. Overfished sites had >3 fold more overgrowth of corals by sponges, and mean coral contact with sponges was 25.6%, compared with 12.0% at less-fished sites. Greater contact with corals by sponges at overfished sites was mostly by sponge species palatable to sponge predators. Palatable species have faster rates of growth or reproduction than defended sponge species, which instead make metabolically expensive chemical defenses. These results validate the top-down conceptual model of sponge community ecology for Caribbean reefs, as well as provide an unambiguous justification for MPAs to protect threatened reef-building corals.

An unanticipated outcome of the benthic survey component of this study was that overfished sites had lower mean macroalgal cover (23.1% vs. 38.1% for less-fished sites), a result that is contrary to prevailing assumptions about seaweed control by herbivorous fishes. Because we did not quantify herbivores for this study, we interpret this result with caution, but suggest that additional large-scale studies comparing intensively overfished and MPA sites are warranted to examine the relative impacts of herbivorous fishes and urchins on Caribbean reefs. 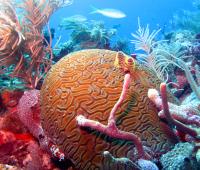