LA JOLLA--(April 16, 2018) Many neurological disorders--Alzheimer's, schizophrenia, autism, even depression--have lagged behind in new therapies. Because the brain is so complex, it can be difficult to discover new drugs and even when a drug is promising in animal models, it often doesn't work for humans.

Scientists are aiming to change that with stem cell technology by taking skin cells from a patient and turning those cells into neurons. Researchers can then test new drugs and study the development of disease in these lab-grown neurons, and even test the potential to use these "personalized neurons" for tissue replacement via transplantation to cure a damaged part of the brain. However, while biologists have already had success in growing tiny, stem-cell-based brain-like "organoids" in dishes or test tubes for diagnostic and therapeutic purposes, these model systems are still a long way from representing the complexity of the brain.

Scientists from the Salk Institute report a new approach that can develop more sophisticated organoid models by ensuring they receive sufficient oxygen and other nutrients via transplantation into rodents. The work, published in Nature Biotechnology on April 16, 2018, could yield insights into the development of cures for brain disorders; speed up the testing of drugs; and even pave the way for someday transplanting healthy populations of human cells into people's brains to replace damaged or dysfunctional tissue.

"Brain organoids are powerful tools for investigating human brain development and disorders," says senior author Rusty Gage, professor of Salk's Laboratory of Genetics. "But currently they do not fully represent native physiological environments. This work brings us one step closer to a more faithful, functional representation of the human brain and could help us design better therapies for neurological and psychiatric diseases."

Brain organoids grown in culture dishes or test tubes are structurally and functionally limited because, without a system of blood vessels, nutrients cannot reach the interior of their 3D structure. This reduces organoids' survival time and complexity, as cells cannot undergo as many divisions to increase their number or to diversify cell type. Although some researchers have attempted to address these limitations by simultaneously grafting vascular tissue onto organoids, this approach still does not fully mimic the cellular microenvironment of an actual brain.

The Gage lab sought to replicate a more supportive physiological environment by grafting human stem-cell-based organoids into a blood-vessel-rich area of the mouse brain. The grafted human organoids integrated into the host environment, formed both neurons and neuronal support cells called astrocytes, and were surveyed by immune cells. Significantly, the team saw not only native blood vessels, but vessels with blood flowing through them--a first for organoids.

"That was a big accomplishment," says Abed AlFattah Mansour, a Salk research associate and the paper's first author. "We saw infiltration of blood vessels into the organoid and supplying it with blood, which was exciting because it's perhaps the ticket for organoids' long-term survival."

As part of the study, the Salk team divided each organoid in half before transplantation, and maintained one of the halves in culture so they could directly compare the benefit of both environments. They found that the cultured halves were filled with dying cells after a few months, while the age-matched organoids in the rodents were healthy.

To find out if the transplanted organoids were functional as well as healthy, the team conducted calcium imaging tests, in which neurons produce a dye when they fire. And, indeed, the neurons within the organoids were firing in a synchronized way. Additionally, the team used a technique called optogenetics (where cells are made responsive to light) to confirm that the grafted neurons were forming connections with each other and with the host organism, which is also a first.

"This indicates that the increased blood supply not only helped the organoid to stay healthy longer, but also enabled it to achieve a level of neurological complexity that will help us better understand brain disease," says Mansour.

Human transplantation in animals has been used for decades in brain and other tissues to enhance survival and test for mature function.

"This work builds on a grafting technique I helped develop in 1984," adds Gage, who holds the Vi and John Adler Chair for Research on Age-Related Neurodegenerative Diseases. "It is gratifying to see that it works so well with brain organoids, which have immense potential to elucidate brain function in neuropsychiatric disease." 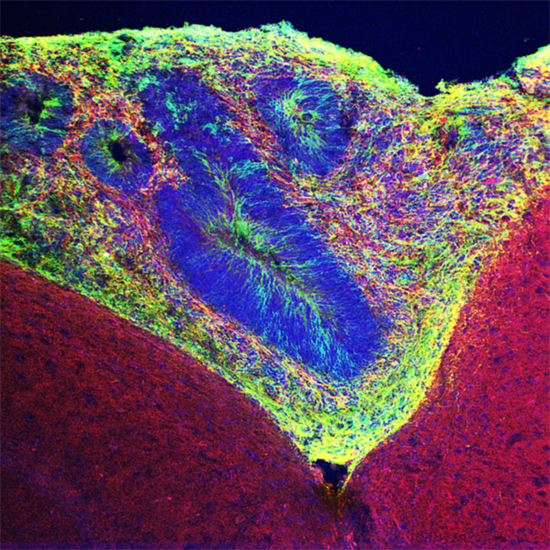