The 2019 Nobel Prize in Chemistry has been awarded to Prof. John B. Goodenough of the University of Texas, Austin, U.S., Prof. M. Stanley Whittingham of Binghamton University, U.S., and Dr. Akira Yoshino of Asahi Kasei Corporation and Meijo University, Japan "for the development of lithium-ion batteries." Prof. Goodenough recently published a perspective article entitled "A Perspective on the Li-Ion Batteries" in Science China Chemistry and discussed the history, current challenges, and promising research directions of lithium-ion batteries, the ubiquitous energy-storage devices in electronics.

The research on the modern rechargeable batteries initiated in the 1960s, marked by the pioneering work of German scientist R. Schroeder and French scientist J. Rouxel, who investigated the chemistry of reversible intercalation of Li+ into transition metal disulfides (MS2). In 1976, Prof. Whittingham published the seminal paper in Science, where he identified TiS2 as an excellent Li+ host to enable energy storage via Li+-intercalation (Figure 1).

The Request for Lithium-Ion Batteries

A fatal problem of the Whittingham battery soon aroused. The anode material, Li metal, was a trouble maker. During the charging process, Li+ de-intercalated from TiS2 and reduced to Li(0) on the Li metal surface. The deposition of Li+, however, is non-uniform due to different nucleation energy across the metal surface, thus creating pointy Li crystals termed Li dendrites or whiskers. Such dendrites could pierce the separator sitting between Li metal and TiS2 (Figure 2), trigger electrical short circuits, ignite organic-liquid electrolytes, and cause combustions or explosions. This severe safety concern halted the development of Li-based batteries.

The Birth of Li-Ion Batteries

In the 1980s, the Li-based batteries were revived by Prof. Goodenough, whose research team proposed a battery without Li metal. Since Li metal served as a source of Li+, the elimination of Li requires either cathode or anode, to contain abundant Li+ ions and serve as Li+-reservoirs. In 1980, Prof. Goodenough and coworkers demonstrated in Materials Research Bulletin a Li-containing layered oxide, lithium cobalt oxide (LiCoO2, Figure 3a), as a potent cathode material. Since the function of the cell relied merely on Li+ (without metallic Li), it was coined the Li-ion battery (Figure 3b). In 1987, Dr. Yoshino demonstrated the first working Li-ion battery with a graphitic carbon anode and a LiCoO2 cathode, which was licensed to the Sony Incorporation and eventually led to the commercialization of Li-ion battery in 1991. Through years of development, the cathodes in modern Li-ion batteries have significantly been diversified, spanning from lithium iron phosphate (LiFePO4) to lithium nickel-manganese-cobalt oxide (NMC) and lithium nickel-cobalt-aluminum oxide (NCA), etc.

The Limitations of Lithium-Ion Batteries

The modern Li-ion batteries are still facing several limitations that are calling concerted efforts from both industry and academy to tackle. They include:

The above problems demand careful and real-time monitoring of the battery's working conditions, which significantly increases the operation and maintenance costs.

The Future of Lithium-Ion Batteries

Prof. Goodenough highlighted at the end of the article that developing alternatives to liquid electrolytes could be a promising strategy to address the challenges. Ferroelectric amorphous oxide glasses and polymer electrolytes percolated with liquid organic Li+ solutions are possible candidates.

This post is contributed by Dr. Tianyu Liu at the Department of Chemistry, Virginia Tech, U.S. Tianyu Liu acknowledges the careful proofread by the editorial office of Science China Chemistry. 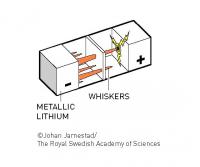