Researchers now have a possible solution for the one in three adults who fail to take their medicines as prescribed by their doctors, as well as for everyone else who occasionally forgets: a sensor necklace that records the exact time and date when specially-designed pills are swallowed, and reminds the user if any doses are being missed.

“Forgetfulness is a huge problem, especially among the elderly, but so is taking the medication at the wrong time, stopping too early or taking the wrong dose,” said Maysam Ghovanloo, assistant professor in the Georgia Institute of Technology’s School of Electrical and Computer Engineering. “Studies show that drug noncompliance costs the country billions of dollars each year as a result of re-hospitalization, complications, disease progression and even death.”

Ghovanloo and graduate student Xueliang Huo have designed a sensor necklace that records the date and time a pill is swallowed, which they hope will increase drug compliance and decrease unnecessary health care costs. The device could also be used to ensure that subjects in clinical drug trials take the study medications as directed by the research team. The details of the proof-of-concept device were published in the December 2007 issue of the IEEE Sensors Journal.

The necklace, called MagneTrace, contains an array of magnetic sensors that could be used to detect when specially-designed medication containing a tiny magnet passes through a person’s esophagus. And for persons who may not want to wear a necklace, MagneTrace sensors can be incorporated into a patch attached to the chest.

The date and time the user swallowed the pill can be recorded on a handheld wireless device, such as a smartphone, carried on the user’s body. The information can then be sent to the patient’s doctor, caregiver or family member over the internet. The device can notify both the patient and the patient’s doctor if the prescribed dosage is not taken at the proper time.

According to a 2005 Wall Street Journal Online/Harris Interactive Health Care Poll, one in three U.S. adults who had been prescribed drugs to take on a regular basis reported that they did not follow the doctor-recommended course of treatment, with two-thirds reporting that they simply forgot to take their medication.

This technology can also help researchers and pharmaceutical companies conduct more accurate clinical trials of new drugs. Currently, compliance is determined by medication diaries kept by the patients, but patients are prone to fill out diaries just before meetings held to monitor their progress and they may adjust their medication to compensate for missed doses.

“If each drug trial volunteer had to wear a MagneTrace necklace, the exact date, time and dose would be recorded, rather than relying on the patient’s memory and honesty,” said Ghovanloo.

This technology also has the potential to reduce the size of clinical trials and reduce the need to repeat them. This alone can reduce drug company expenditures, in turn reducing the cost of new drugs for consumers. MagneTrace is suitable for small- and large-scale clinical trials, as well as individual patients, according to Ghovanloo.

“A patient cannot cheat the system by passing the pill past the necklace sensors on the outside of the neck because the signal processing algorithm is smart enough to only look for the pill’s magnetic signature while it passes through the esophagus,” said Ghovanloo, who started working on this project about two years ago at N.C. State University.

The researchers have designed and tested an artificial neck, built from a PVC pipe filled with plastic straws. They place a necklace containing an array of sensitive magneto-inductive sensors around the artificial neck to study detection of a pill passing through it.

The magnetic sensors are distributed in different orientations, allowing the pill to be detected regardless of its orientation when it passes through the patient’s esophagus. The sensors are driven by a control unit on the necklace that consists of a battery, power management circuitry, low-power microcontroller and radiofrequency wireless transceiver. The prototype MagneTrace necklace with six sensors weighs less than one ounce.

Another benefit to MagneTrace is that it monitors ingestion, whereas technologies currently on the market for monitoring drug compliance are typically non-ingestion monitors, which can be easily deceived by the users, either deliberately or unintentionally. One such technology takes advantage of radio frequency identification technology by sending a signal when a pill breaks a printed conductive interconnect while being removed from its package.

“Other devices just tell the doctor if a pill bottle was opened. These devices are not smart enough to tell how many pills, if any, were removed from the bottle, nor if the pill was actually ingested by the intended patient,” said Ghovanloo.

One device that actually monitors ingestion uses an optical sensor to detect a fluorescent dye incorporated in the medication as it enters the bloodstream.

“The problem with this technology is that a patient must add an additional chemical to his/her body and the potential long-term negative side effects of the fluorophores on the human body have not yet been well studied,” explained Ghovanloo.

MagneTrace, on the other hand, was designed so that it would have no effect on the body. Multiple strong magnets in the gastrointestinal tract can potentially result in a blockage. However, the magnet used in the pill or capsule is very small – three millimeters in diameter and about one millimeter thick – and coated with a thick indigestible, insoluble polymer coating that prevents absorption of the magnet and prevents magnets from aggregating.

While the device has not yet been tested on animals or humans, theoretical and experimental analyses show that the magnetic force of the magnets can be reduced by the coating to less than the force due to the weight of the tracers.

“The magnet should simply pass through a patient’s gastrointestinal tract with no interactions and be excreted from the body in about 24 hours without any effects,” noted Ghovanloo. 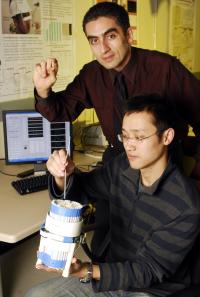