Tropical Cyclone Emeraude developed early on March 16 in the Southern Indian Ocean, but NASA's GPM core satellite saw the storm coming together the day before.

The Joint Typhoon Warning Center (JTWC) expects Emeraude to turn to the east-southeast, intensifying to 105 knots by March 18 as it moves through an area of warm sea surface temperatures and low vertical wind shear. Emeraude is then expected to turn south and weaken. 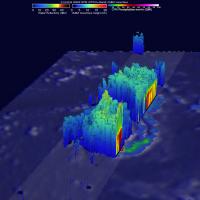