By 2050, faster adoption of electric vehicles (EVs) and faster generation of renewable energy will result in 99% less fossil fuel consumed and 93% less CO2 emissions from passenger and freight vehicles on O?ahu. That's under the most ambitious scenario in an article published in World Electric Vehicle Journal, by University of Hawai?i at Mānoa School of Ocean and Earth Science and Technology (SOEST) faculty member Katherine McKenzie.

McKenzie, based at the Hawai?i Natural Energy Institute in SOEST, created mathematical models of four scenarios based on projections for the switch to electric passenger and freight vehicles, and renewable power generation. She quantified the impacts of fossil fuel use and CO2 emissions on O?ahu and found that scenarios with a slower transition to EVs result in billions more gallons of gasoline consumed, and tens of millions more tons of CO2 emitted.

As with many other remote communities still dependent on oil for both transportation and power, there remains a lack of critical analysis to determine the benefits of transitioning from internal combustion engine vehicles to plug-in electric vehicles (EVs). In 2020, average passenger EVs were found to consume the equivalent of 66 gallons of gasoline, seven times less fossil fuel than their gasoline-powered counterparts, which used 455 gallons. Average EVs also cut emissions in half, two metric tons of CO2 versus four metric tons of CO2.

"Continuing to purchase anything powered by petroleum locks in emissions and energy insecurity for years to come, at a time when decarbonization is a climate imperative," said McKenzie. "A shift is needed to energy efficient modes of travel--such as bicycling, walking and transit, along with reducing vehicle miles traveled (by "smart" city planning and remote work for example)." 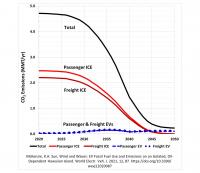