Scientists at the University of Southampton have found that a marine invasive species - a sea squirt that lives on rocky shores - could spread along 3,500 kilometres of South American coastline if climate change or human activities alter sea conditions.

The researchers - working with colleagues at Pontificia Universidad Católica de Chile; Flinders University, Australia; University of Johannesburg and Rhodes University, South Africa - analysed the creature's DNA and used predictive modelling to identify regions it could move to and thrive in.1 Findings are published in the journal PNAS.

The team took a multidisciplinary approach to predict the potential distribution of a species that is currently restricted. Studying species with small distributions provides a unique opportunity to understand how some eventually become widespread.

Pyura praeputialis is an invertebrate that dominates the ecology of the regions it lives in and has the capacity to alter, fundamentally, coastal habitats. By outcompeting and overgrowing native fauna, invasive species such as this can cause impacts to biodiversity and even important economic activities.

The team sequenced the DNA of 190 samples from 13 sites along South America and Australia. They discovered that the species found in South America originated from a single region off Sydney, Australia - possibly transported to Antofagasta Bay in Chile on the hulls of wooden trading boats over 100 years ago. The population has remained trapped in the bay ever since, contained within its body of relatively warm water, which is 2-3 degrees higher than the surrounding sea.

However, this latest study suggests that just a slight change in currents, sea temperature and/or shipping routes may lead to an unchallenged expansion of the species to encompass a vast portion of coast, including northern Chile, Peru and much of Ecuador.

Lead researcher, research fellow Jamie Hudson comments: "Understanding why some species are widespread, whereas others have narrow ranges is a fundamental question in biological studies. Our work shows the importance that combining genomic data from DNA and habitat modelling can have in helping predict potential changes in the distribution of species and their impacts.

"The unusual conditions of Antofagasta Bay provided us with ideal conditions to study a species which has had its distribution restricted by local conditions. We found high genomic diversity in both native and introduced populations, indicating high adaptive potential in Chile."

The researchers concluded that further monitoring of Pyura praeputialis in the region is strongly recommended and that, more generally, future studies should consider both habitat suitability and genomic data to assess holistically the spread potential of invasive species.

1) The researchers used population genomics and species distribution modelling to investigate ecological and evolutionary mechanisms that shape the distribution of this invasive species.

3) The paper Genomics-informed models reveal extensive stretches of coastline under threat by an ecologically dominant invasive species is published in the journal PNAS at https://doi.org/10.1073/pnas.2022169118

4) The University of Southampton drives original thinking, turns knowledge into action and impact, and creates solutions to the world's challenges. We are among the top 100 institutions globally (QS World University Rankings 2021). Our academics are leaders in their fields, forging links with high-profile international businesses and organisations, and inspiring a 22,000-strong community of exceptional students, from over 135 countries worldwide. Through our high-quality education, the University helps students on a journey of discovery to realise their potential and join our global network of over 200,000 alumni. http://www.southampton.ac.uk

5) For more about Ocean and Earth Science at the University of Southampton visit: https://www.southampton.ac.uk/oes/index.page 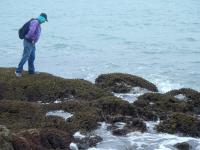