Growing up in the wild makes plants tough. Wild plants evolve to survive the whims of nature and thrive in difficult conditions, including extreme climate conditions, poor soils, and pests and disease. Their better-known descendants - the domesticated plants that are critical to a healthy diet - are often not nearly as hardy. The genes that make crop wild relatives robust have the potential to make their cultivated cousins - our food plants - better prepared for a harsh climate future. But a series of new research papers show these critical plants are imperiled.

"The wild relatives of crops are one of the key tools used to breed crops adapted to hotter, colder, drier, wetter, saltier and other difficult conditions," said Colin Khoury, a scientist at the International Center for Tropical Agriculture, or CIAT. "But they are impacted by habitat destruction, over-harvesting, climate change, pollution, invasive species, and more. Some of them are sure to disappear from their natural habitats without urgent action."

Khoury and colleagues' latest focus has been on the wild relatives of vegetables, including chile peppers, lettuce, and carrots. Their most recent publication was on the distribution, conservation status and stress tolerance of wild cucurbits, or the gourd family, which includes zucchini, pumpkins, and squash. The findings were published online Dec. 10 in Plants People Planet.

Even with protection in the wild, the researchers found that many crop wild relatives require urgent safeguarding in gene banks to assure long-term survival. They determined that more than 65 percent of wild pumpkins and more than 95 percent of wild chile peppers are not well represented in genebanks.

Gene banks are repositories for seeds and other plant material that assure continued propagation of new plants and allow scientists to study their often complex genetic traits.

The studies include the first highly detailed maps of the distributions of the wild relatives of these crops. Mapping their ranges, and especially areas with a great density, endemism, and diversity, can help policymakers and conservationists prioritize areas in need of protection. The findings will help crop breeders more efficiently find wild relatives with traits needed for crop development. The results will be used to guide rescue missions aimed at collecting vulnerable species before they disappear.

"If they disappear, they are gone," said Khoury. "Extinction is forever, which is a loss not only in terms of their evolution and persistence on the planet, but also a loss to the future of our food."

"Our main finding is that more conservation work needs to be done to ensure that these wild species are well represented in gene banks, and are also adequately protected in their natural habitats," said Khoury, who is also a researcher at the United States Department of Agriculture and Saint Louis University. "We were able to produce maps that can help indicate to plant collectors and to land managers where the most significant gaps are in terms of current conservation, including where you might go to find and protect many species in hotspots of diversity".

A global effort for a global concern

The work also highlights the extent to which the wild relatives of vegetables have not been a priority for conservation when compared to other crops.

"Since they aren't cereal commodities, vegetables get less attention, especially when it comes to their wild relatives. But for health and sustainability reasons, these are the kind of crops that researchers should be devoting more of their time to," said Khoury.

The collection of studies is a big step toward providing foundational information about the wild relatives of these four globally important vegetable crops.

Contributors included botanists, geographers, crop breeders, and conservationists from international and national agricultural research organizations and leading universities. They drew upon their expertise, combined with vast amounts of publicly available research data, for the studies. They also used global climate information to assess which species might have the most useful adaptations to heat, cold, drought, and other crop production challenges.

Finally, they assessed how well the species are represented in current international and national gene banks, as well as how well safeguarded the species are within officially designated protected areas.

Chile peppers, pumpkins, carrots, and lettuce are among the most widely consumed vegetables in the world, with the first three crops providing essential nutrients such as vitamin A and C. Research on such crops has been minor compared to cereals and starchy tubers such as wheat, maize, rice, and potatoes, despite the widely acknowledged need to consume more vegetables across essentially all people worldwide. Because of the lack of research, these crops are often much less productive than grains and tubers. At the same time, these crops need more resources including water and land to produce them and are generally more sensitive to climate change and pests and diseases.

"Filling the gaps in information about the wild relatives of vegetable crops such as chile and bell peppers will help these crops fulfill the nutritional roles they will need to in the future," said Derek Barchenger, a plant breeder at the World Vegetable Center, located in Taiwan, who was involved in the chile research.

"The results reveal at high resolution the geography of the wild relatives of these important crops. This is of interest not only to conservation, but also to better understand the origins and diversification of these species over millions of years, and even possibly to shed further light on where the crops may have been domesticated," said Heather Rose Kates, a postdoctoral associate at Florida Museum of Natural History.

"Our research outlines some of the major breeding challenges that the crops face, in terms of climatic stresses, for example, heat and drought for carrots," said Najla Mezghani, the curator of vegetable crops in the National Genebank of Tunisia who was involved in the wild carrot research. "We determined which populations of wild relatives might have adaptations to these stresses that can make them particularly useful in plant breeding".

The wild relatives of major vegetables, needed for climate resilience, are in danger 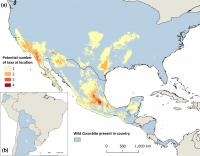