Acacia trees are a prominent feature of the East African savannah. They're also a classic example of the long-standing and complex relationships between plants and insects, in this case acacia ants. The acacias provide food in the form of nectar and accommodation in hollow thorns for the ants. In return, the ants defend the acacias against nibbling elephants, giraffes, or other animals that would eat them.

Now, researchers reporting in the journal Current Biology on February 14 find that the ants are tipped off to the presence of herbivores by vibrations that run throughout the trees when an animal gets too close or begins to chew. As a result, the insects begin patrolling the acacia's branches more actively. Remarkably, the researchers show, the ants don't react when the trees' movements are caused only by the wind.

"The vibrations that occur when a mammal plucks a leaf are so powerful that they spread across the whole tree and are perceived by the ants," says Felix Hager of Ruhr University Bochum, Germany. "As a result, the ants are alerted within a fraction of a second and promptly orient toward the attacker."

Hager and study co-author Kathrin Krausa began to suspect that vibrations were important while working in the Kenyan savannah. "We often inadvertently touched the acacia branches and backed off because of the very fast and disruptive attacks of ants that swarmed on us," Krausa says. "It struck us that it was assumed that odors associated with plant damage alert the ants. As biotremologists studying vibrations, we felt that this is only half of the story."

Hager and Krausa thought that vibrations might be a more immediate and reliable information source for the ants. To test this, the researchers first measured vibrations in acacia induced by the wind and a by browsing goat. Then, they devised a mechanical device calibrated so as to reproduce the movement associated with a chewing, four-legged mammal.

Their studies show that acacia ants respond to vibrations associated with a simulated herbivore, but not to the wind. They could respond to vibrations originating at some distance away. In almost every case, the ants also responded by heading toward the source of those vibrations. In other words, not only did they feel the vibrations, but they could tell based on them which way to go.

"If an ant detects vibrations due to an elephant nibbling at its tree, it needs to find the attacker as soon as possible and decide in which direction to go," Krausa says. "We were impressed by the ants. Spread all over the tree, they made the right decision and walked toward the vibration source to fight back against the attacker almost every time."

Hager says that this is just the beginning of studies to explore the vibration sense. "We've just started to understand this mode of communication," he says. "There is a lot of work waiting for us!"

The research was financially supported by the Alexander von Humboldt Foundation.

From vibrations alone, acacia ants can tell nibbles from the wind 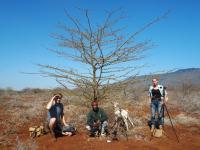