Aussie researchers have found a new way to make one of the most common medical procedures in the world - placing drips or intravenous (IV) lines - safer, less painful and potentially more cost effective.

The researchers, who were funded by the Emergency Medicine Foundation of Australia (EMF), found that using medical skin glue to hold hospital drips in place significantly reduced the need to replace them due to infection, pain, blockage or falling out.

Caboolture Hospital Emergency physician and lead researcher, Dr Simon Bugden, said the failure rate for IV lines in the first 48 hours was 29-40 per cent in Australia and as high as 90 per cent internationally.

"We found that by using medical skin glue, we could reduce the failure rate to below 17 per cent," Dr Bugden said.

"The glue made IV lines harder to unintentionally remove and was also shown to kill the bacteria that most commonly cause infections.

"The other major benefit was patient comfort, with patients in the trial reporting that the glue caused less irritation and they were less worried about the lines falling out.

"Doctors place more than 10 million IV lines in Australia each year - and more than 300 million in the US - so reducing the need to replace IV lines will save staff time and free up valuable healthcare resources."

With funding from Queensland Health, EMF awarded a $50,000 grant for the research and patient trials, which ran over several months at Caboolture Hospital in Queensland.

The research is currently undergoing a cost-benefit analysis by health economists at Griffith University, with a view to rolling out the new procedure on a wide scale.

"There has been no improvement to the current procedure of inserting and securing IV lines in several decades, despite the rate of failure," A/Prof. McCarthy said.

"Dr Bugden's method could be simply and cost-effectively introduced in hospitals worldwide.

"EMF is committed to ensuring Australia continues to stay at the forefront of emergency medicine care by funding to dedicated research in this field."

Dr Bugden's research was recently published in the Annals of Emergency Medicine.

Medical glue is the clue to reducing IV drip failure 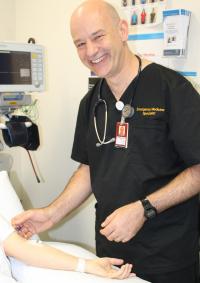