Ithaca, NY--Some "canaries" are 50 feet long, weigh 70 tons, and are nowhere near a coal mine. But the highly endangered North Atlantic right whale is sending the same kind of message about disruptive change in the environment by rapidly altering its use of important habitat areas off the New England coast. These findings are contained in a new study published in Global Change Biology by scientists at the Center for Conservation Bioacoustics (formerly the Bioacoustics Research Program) at the Cornell Lab of Ornithology and at Syracuse University. It's the longest running published study to continuously monitor the presence of any whale species at one location using sound."

"The change in right whale presence in Massachusetts Bay over the six years of the study is striking," says lead author Russ Charif, senior bioacoustician at the Center for Conservation Bioacoustics (CCB) at Cornell. "It's likely linked to rapid changes in conditions along the Atlantic Coast, especially in the Gulf of Maine which is warming faster than 99% of the rest of the world's ocean surface."

Charif points out that, starting in 2011, other studies began documenting dramatic changes in habitat use by right whales in other parts of the Gulf of Maine, which includes Massachusetts Bay and Cape Cod Bay. Massachusetts Bay is the gateway to Cape Cod Bay, one of the most important feeding areas for North Atlantic right whales, who congregate there in large numbers in late winter to early spring.

Nineteen marine autonomous recording units (MARUs) were deployed by CCB in Massachusetts Bay from July 2007 to April 2013, recording around-the-clock to detect the characteristic "up-call" of the North Atlantic right whale. Analysis of 47,000 hours of recordings by computer detection systems and human analysts found that in all but one of the study years detection of right whale calls kept increasing.

"During the six years of the study, our detection rates doubled during the winter-spring months," says study co-author Aaron Rice, principal ecologist with CCB. "During the summer-fall months the rate of detection for right whales had increased six-fold by the end of the study period, rising from 2% to 13% of recorded hours."

The scientists found right whales were present to varying degrees all year round in Massachusetts Bay, with implications for conservation efforts.

"There are seasonal conservation measures that kick in based on our historical understanding of where and when right whales are most often congregating, including Massachusetts Bay," Rice explains. "But the old patterns have changed and whales are showing up in areas where there are no protections in place to reduce the likelihood of ship strikes or fishing gear entanglements."

Entanglements and ship strikes remain the biggest threats to right whales with unknown cumulative effects from changing water temperatures, rising ocean noise pollution, and other stressors. The increasing use of Massachusetts Bay occurred even as the overall right whale population declined. Latest estimates peg the population at about 400 animals with only 95 of them females of reproductive age.

"Our study data end in 2013 and conditions may have changed even more since then," says Charif. "We need to do more of these long-term studies if we're to have any hope of understanding how right whale habitat is changing because of human activities and before it's too late for the species to survive." 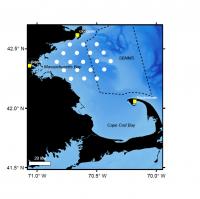