Named for Charles Darwin, the only known specimen of a newly discovered beetle, Darwinylus marcosi, died in a sticky gob of tree sap some 105 million years ago in what is now northern Spain. As it thrashed about before drowning, more than 100 clumped pollen grains were dislodged from its body and released into the resin. Five grains remained stuck to the beetle itself. Preserved with the beetle in the now-hard amber, the grains reveal that the beetle had been chewing a pollen meal with its jaw-like mouthparts just before it died.

Scientists familiar with this era in earth's history, the mid-Mesozoic, didn't need to ponder long about what flowers produced the pollen. The answer is none. The amber dates to a time when flowering plants--angiosperms--were just beginning to appear and the earth was overwhelmingly dominated by diverse, non-flowering plant species, such as cycads, ginkgoaleans, bennettitaleans and conifers--the gymnosperms.

Now, the discovery of D. marcosi in Spanish amber is proof of a new insect pollination mode that dates to the mid-Mesozoic: beetles with biting or "jaw-like mouthparts and a chewing feeding style," says Conrad Labandeira, a paleobiologist at the Smithsonian's National Museum of Natural History. This amber fossil is the "... first, direct evidence of a fourth major gymnosperm-insect pollination mode during this time." A study on this discovery--and its significance in the context of a growing body of evidence of gymnosperm-insect pollinator relationships and modes leading up to the rise of flowering plants--was published today, March 2, 2017, in the journal Current Biology. A display featuring key findings from this study and gymnosperm-insect pollinator relationships will be included in the museum's new fossil hall, scheduled to open in 2019.

The beetle is the latest in a series of recently discovered gymnosperm-pollinating insects that flourished during the mid-Mesozoic. Scorpionflies, lacewings, flies and moths with long, straw-like proboscises siphoned pollination drops. Pollination drops are a liquid similar to the nectar of flowering plants that originate from deep funnel-like holes in pine-cone-like structures and other, often bizarre, gymnosperm ovule-bearing organs. Flies with sponge-like mouthparts also lapped up this sweet plant nectar. Thrips with punch-and-suck mouthcone mouthparts drained the nutritious juices by cracking pollen grains, performing a different type of pollination. All three of these insect-pollinator feeding modes have been found in 165- to 105-year-old amber and stone fossils that show gymnosperm pollen clinging to various mouthpart structures, heads and bodies of these insects.

The newly reported discovery, taken with the growing body of gymnosperm-pollinator insect evidence, is important, Labandeira says, "... as it reveals the broad pattern of four distinctive pollinator modes that were present before the dominance of flowering plants between 125 and 90 million years ago." These pollinator modes survive to the present day, although the particular plant and insect participants are mostly long gone.

Modern relatives of D. marcosi, a family known as false blister beetles, today pollinate flowering plants rather than gymnosperms. The amber fossil reveals that these beetles are one of a number of gymnosperm pollinators that "... successfully made the transition to feeding on and pollinating flowering plants," Labandeira says.

In the Cretaceous, many gymnosperms and the insects that pollinated them went extinct in a world-wide shake-up during the Aptian-Albian Gap between 125 to 90 million years ago. This period is well-documented in the fossil record as gymnosperm diversity plunged and flowering plants soon came to dominate the earth during a 35-million-year long transition.

Those insect pollinators that depended upon gymnosperms and couldn't make the transition became extinct. The very few that remained with the gymnosperms and survived saw a major drop in their diversity. Most gymnosperms today, such as conifers and the ginkgo, are wind pollinated; far fewer gymnosperms, such as the cycads and an unusual group known as gnetaleans, are insect-pollinated.

"During this transition in pollination strategies, some pollinators had finely tuned mouthparts and other bodily features that corresponded to delicately constructed components in their gymnosperm host plants," says Labandeira. "And since these insect pollinators and plants were codependent, there was a risk for extinction of both partners, if one faltered--which largely happened. Modern insect pollinators and their host plants may be facing similar conditions today, and our understanding of this earlier transition may help us better grasp and comprehend the present situation."

Insects that made the transition from gymnosperms to angiosperms were able to do so while retaining basically the same mouthpart types, Labandeira says, in part because most insects pollinated a variety of generally unrelated plants with the similar rewards of pollen and pollination drops, even though the pollen producing and ovule-bearing organs were quite different between these two major types of plants. "The protoplasts of gymnosperm pollen are virtually the same as that of angiosperm pollen," Labandeira says. "Gymnosperm pollen drops and angiosperm nectar originate in different tissues but also are very similar in composition and in almost all other properties, including nutritional content."

The research team for this study included collaborators with Universitat Jaume I and University of Barcelona in Spain; the Geological and Mining Institute of Spain; the Smithsonian's National Museum of Natural History, Harvard University and the University of Maryland in the United States; and Capital Normal University in China. 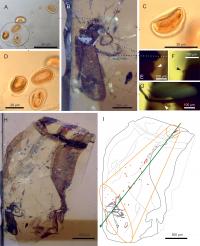