CHICAGO—Imagine future archaeologists trying to understand Illinois, California or New York based on a few excavations in each of those states. They might excavate small areas in city centers, since those sites would probably be the first ruins they would come across. Meanwhile, the archaeologists they might fail to notice or study farms, suburbs, shopping malls, canals and airports.

Although still relatively unknown to the general public, an archaeological method that is being practiced at several locations around the world helps scientists overcome such bias toward large, readily noticeable sites. The method is called a regional settlement pattern survey. It involves walking systematically over a large landscape to find traces of archaeological sites on the surface of the ground. This field procedure can yield a holistic, integrated view of how settlement has shifted in a region over the course of history.

For the past 13 years, archaeologists from The Field Museum and Shandong University have used this method to develop a multifarious overview of an important but understudied region along the northeastern coast of The People’s Republic of China. By the time the project is completed, the archaeologists expect to have walked systematically over 1,500 square kilometers around the coastal city of Rizhao in Shandong Province.

“Most people understand traditional archaeological excavation from TV shows, but the regional survey method is not well known,” said Dr. Anne Underhill, Field Museum China specialist and American project director and lead author of research about the Shandong survey to be published in the March 2008 Journal of Anthropological Archaeology. “The team has walked over every kind of terrain possible, including farms and orchards, towns and forested hills.”

The Shandong University-Field Museum project in southeastern Shandong Province (including both survey and excavation, and involving four Shandong University professors) is one of the longest running collaborations of any kind between Chinese and American scientists. In the early 1990s, the Chinese government decided to allow foreigners to collaborate in fieldwork with Chinese professionals for the first time since the founding of the People’s Republic of China in 1949. The team decided to focus on investigating key changes in settlement and regional organization during the late prehistoric, Longshan period, c. 2600-1900 B.C.

“Scientific archaeology was introduced into China during the 1920s, and during the 1980s, investigations about the rise of civilization increased,” said Dr. Hui Fang, Professor of Archaeology at the Center for East Asian Archaeology Studies at Shandong University and co-author of the research. “Then in the 1990s, abundant results from archaeological fieldwork made it possible to adopt new approaches such as the theory and method of settlement pattern studies to interpret the process of the beginning of civilization in areas such as Shandong province.”

Expertise with the survey method has been provided by two Field Museum scientists and co-authors of the research, Dr. Gary Feinman, Curator of Mesoamerican Anthropology, and Linda Nicholas, Adjunct Curator of Anthropology. They surveyed extensively for archaeological sites in Oaxaca, Mexico, before joining the Shandong survey team.

“When we began the project in China, systematic regional surveys had already proven to be an empirical key for understanding and evaluating the rise of and changes in early civilizations in highland Mexico, the Andean region, and the Near East,” Feinman said. “Since then, two prominent scholars have called the advent of settlement pattern studies across the world the most important breakthrough in archaeology during the second half of the 20th century.”

The method is very effective, Nicholas said. “We discover and map many ancient sites on a daily basis. Because so few of these sites will ever be excavated, the survey maps become the only permanent record of most ancient settlements in a region.”

Over the years and centuries, human activity (such as plowing and construction) and natural processes (such as erosion) bring many ancient artifacts to the surface of the ground. Survey crews look for such evidence by walking in the late fall or early winter when crops have been harvested, increasing the visibility of objects. Crew members, who are spaced out evenly, learn to identify the characteristics (color, paste, style, etc.) of pottery sherds that indicate particular time periods.

“The large-scale organization of culture can only be understood by revealing the overall layout of settlements in a region and comparing their sizes,” Underhill said. “Then one can begin to analyze other aspects of regional organization such as population density, distances between sites, and distances to water sources, all of which can reveal information about economics, trade, interactions, and other factors.”

China has an extraordinarily rich record of archaeological remains, from the Paleolithic period to the historic dynasties. Given the vast number of sites throughout Shandong Province, southeastern Shandong had not been a focus of research for quite some time prior to this research project.

Previous excavations in 1936 and test excavations during the early 1980s uncovered elegant, black pottery and jade items over a large area, suggesting that the Longshan period site of Liangchengzhen was some kind of regional center during the Longshan (c. 2600-1900 BC).

The systematic, regional survey has been able to identify other Longshan sites in the area and objectively determine that Liangchengzhen was indeed a large center as early investigators hypothesized. It also revealed another large center in the south, Yaowangcheng, that may have been a rival.

The survey also suggests that the agricultural colonization of the region occurred primarily during the later half of the Neolithic period. This was rapidly followed by the development of a four-tiered settlement hierarchy with two primary centers during the Early Longshan. The archaeologists conclude that the region was not merely a marginal backwater throughout its history in comparison to areas in the central Yellow River valley where known early states developed, as some scholars believe.

“Regional survey data are one key to understanding and comparing the rise of early Chinese civilization, both from one part of China to another as well as with other global regions,” Feinman said.

The broad-based results of the regional settlement pattern survey clearly illustrate that there were diverse pathways to social complexity in northern China.

“Our collaborative project has been very successful,” Fang said. “In comparison with 13 years ago, we now know much more about the process of the rise of complex society in the southeastern Shandong area.”

Scientists walk through tea fields in southeastern Shandong as part of an innovative settlement pattern regional survey that uncovered important new evidence about how this region of China developed. This photograph was taken in 2006, and the team has completed 13 years of survey to date, making it one of the longest running collaborations of any kind between Chinese and American scientists. On the right, Linda Nicholas, Adjunct Curator of Anthropology at The Field Museum, carries a map on which she marks the distribution of the prehistoric and Early Bronze Age sherds found during the survey.
Photo by Anne Underhill, courtesy of The Field Museum

Dr. Hui Fang, Professor of Archaeology at the Center for East Asian Archaeology Studies at Shandong University, scrapes the edge of a farmer's field to reveal the profile of a pit from the Western Zhou period (1046-771 B.C.) evidenced by the darker colored soil. To his left is University of Chicago graduate student Adam Schwartz.
Photo by Anne Underhill, courtesy of The Field Museum

While local residents look on, scientists collect objects at a Longshan period (c. 2600-1900 B.C.) site during the 2006 field season of the settlement pattern regional survey in southeastern Shandong. Dr. Gary Feinman, Curator of Mesoamerican Anthropology at The Field Museum, is in the foreground, and Dr. Hui Fang, Professor of Archaeology at the Center for East Asian Archaeology Studies at Shandong University, walks toward him.
Photo by Anne Underhill, courtesy of The Field Museum

Examples of pottery sherds collected from farmers’ fields during the 2006 field season of the settlement pattern regional survey in southeastern Shandong. Crew members learn to identify the characteristics (color, paste, style, etc.) of pottery sherds that indicate particular time periods. The red sherd in the foreground is from the Western Zhou (1046-771 B.C.), and the sherd being picked up is from the Han (206 B.C. - A.D. 220).
Photo courtesy of The Field Museum 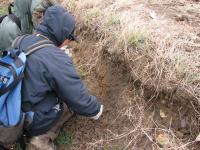 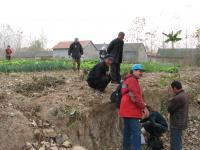