Tropical Storm Maarutha became the first tropical cyclone of 2017 in the Bay of Bengal when it formed on April 15, 2017. Although the tropical cyclone only lived two days, NASA gathered rainfall rate data on it on the day it developed.

Maarutha intensified slightly as it moved northeastward toward Burma (Myanmar). Maarutha reached its maximum sustained wind speed of 45 knots (52 mph) over the open waters of the Bay of Bengal. That's when Global Precipitation Measurement mission or GPM core observatory satellite got a good view of the forming tropical cyclone. GPM passed over Maarutha on April 14 at 0121 UTC (April 13 at 9:21 p.m. EDT) when it was in the Bay of Bengal west of the Andaman Islands.

The next day, on April 15, 2017 at 1431 UTC (10:31 a.m. EDT), GPM had another excellent view just before the organizing tropical cyclone was designated tropical storm Maarutha. The GPM satellite's Microwave Imager (GMI) and Dual-Frequency Precipitation Radar (DPR) instruments showed bands of intense rain wrapping into the low level circulation. GPM's DPR showed that rain was falling at a rate of over 134 mm (5.3 inches) per hour in convective storms near the tropical cyclone's center of circulation.

GPM's radar (DPR Ku Band) data were used to reveal a 3-D vertical cross section through the tall convective storms near the tropical cyclone's center. The 3-D image was created at NASA's Goddard Space Flight Center in Greenbelt, Maryland and showed that the powerful convective thunderstorms that were generating that heavy rain reached altitudes higher than 17.6 km (10.9 miles). GPM is a joint mission between NASA and the Japanese space agency JAXA. 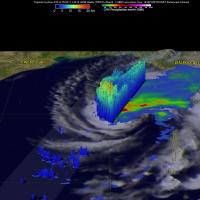