Professor Wang Jian at Peking University and collaborators investigated the superconducting properties of two-dimensional crystalline superconducting PdTe2 films grown by molecular beam epitaxy. They observed the experimental evidence of anomalous metallic state and detected type-II Ising superconductivity existing in centrosymmetric systems. Moreover, the superconductivity of PdTe2 films remains almost the same for more than 20 months without any protection layer. This macro-size ambient-stable superconducting system with strong spin-orbit coupling shows great potentials in superconducting electronic and spintronic applications. The paper was published online in Nano Letters (DOI: 10.1021/acs.nanolett.0c01356) and selected for the Editors' Choice of Science with a title of "An unusual superconductor" (Science 369, 388 (2020)).

Interestingly, under perpendicular magnetic field, the sheet resistance of PdTe2 films drops and then saturates to a temperature-independent constant with decreasing temperature via ultralow temperature transport measurements with high-quality filters. It is the first solid experimental evidence of anomalous metallic states in high-quality 2D crystalline films grown by MBE, which further reveals that besides superconducting and insulating ground states, anomalous metallic state is another quantum ground state for 2D Bosonic systems.

The paper entitled "Type-II Ising superconductivity and anomalous metallic state in macro-size ambient-stable ultrathin crystalline films" was published online in Nano Letters and selected for the Editors' Choice of Science with a title of "An unusual superconductor" (Science 369, 388 (2020)).

Noted: Editors' Choice of Science highlights seven papers from other journals in each issue. This issue includes one paper in Physics. 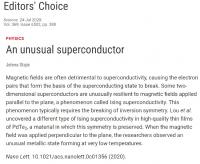