A team of scientists specializing in cave biodiversity from the South China Agricultural University (Guangzhou) unearthed a treasure trove of rare blind cave beetles. The description of seven new species of underground Trechinae beetles, published in the open access journal ZooKeys, attests for the Du'an karst as the most diverse area for these cave dwellers in China.

"China is becoming more and more fascinating for those who study cave biodiversity, because it holds some of the most morphologically adapted cavernicolous animals in the world. This is specifically true for fishes and the threchine beetles, the second of which is also the group featured in this study," explains the senior author of the study Prof. Mingyi Tian.

Like most cavernicolous species, Trechinae cave beetles shows a number of specific adaptations, such as lack of eyes and colour, which are traits common among cave dwellers.

The new Trechinae beetles belong to the genus Dongodytes whose members are easily recognizable by their extraordinary slender and very elongated body. Members of this genus are usually very rare in caves, with only five species reported from China before now.

During the recent study of the cave systems in Du'an karst however this numbers drastically changed, Out of the 48 visited caves 12 held populations of trechine beetles. A total of 103 samples were collected, out of which the team of scientists determined ten different species, seven of which are new to science.

"This new discovery casts a new light on the importance of the Du'an Karst as a biological hotspot for cavernicolous Trechinae in China," adds Prof. Mingyi Tian.

A kingdom of cave beetles found in Southern China 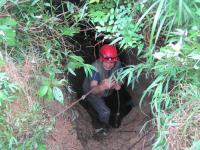