The Global Precipitation Measurement or GPM core satellite provided data on the heavy rainfall and strong storms that affected the southern U.S. on March 9. An analysis of rainfall between March 2 and 9 showed that over a foot of rain had fallen in areas of Texas to Arkansas.

GPM is a mission that is co-managed by NASA and the Japan Aerospace Exploration Agency that measures precipitation rates around the world every three hours. GPM flew over and analyzed the strong storms that occurred in the southwestern United States on March 9, 2016 at 1011 UTC (5:11 CST).

Severe weather had been moving slowly through this area for the past couple days. Two tornadoes developed in north central Texas during the morning of March 8, 2016. During the morning hours of March 9 GPM's Dual-Frequency Precipitation Radar (DPR) instrument measured rain falling at the extreme rate of over 148 mm (5.8 inches) in one powerful storm over eastern Texas. GPM's radar (DPR Ku Band) found that a few thunderstorm tops in this area were reaching altitudes above 13.7 km (8.5 miles).

When GPM passed over the U.S. Southwest, Flash flood and severe weather warnings were issued for parts of Texas, Louisiana, and Arkansas.

GPM precipitation data was compiled over the period from March 2 to March 9, 2016 using data collected by NASA's Multi-satellitE Retrievals for GPM (IMERG). The IMERG creates a merged precipitation product from the GPM constellation of U.S. and international satellites. These satellites include DMSPs, GCOM-W, Megha-Tropiques, NOAA-NASA's Suomi NPP and MetOps. All of the instruments (radiometers) onboard the constellation partners are inter-calibrated with information from the GPM Core Observatory's GPM Microwave Imager (GMI) and Dual-frequency Precipitation Radar (DPR).

Estimates showed that rainfall totals by early on March 9 were already over 376 mm (14.8 inches) from areas in Texas through Arkansas.

The large upper-level low pressure responsible for bringing in tropical moisture to the region is forecast to drift slowly eastward over northern Mexico today, March 10. East of the low, a plume of tropical moisture is expected to continue to stream northward into the Mississippi Valley and the southern plains states, where it will interact with a stationary frontal boundary to produce widespread rain and thunderstorms.

NWS NPC said moisture, instability, and upper-level dynamics will be greatest across the lower Mississippi Valley and portions of the southern plains, and where the potential will continue for very heavy rainfall with the potential for more flash flooding. 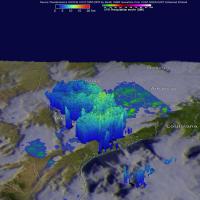