Aerothermoelasticity has become a hot research area for several years around the world. Professor YANG Chao and his group from Beihang University set out to tackle this problem. Their work, entitled "A high-efficiency aerothermoelastic analysis method", was published in Sci China-Phys Mech Astron, 2014, 57(6): 1111-1118.

A hypersonic aircraft generally refers to a hypersonic flight vehicle whose flight Mach number is greater than 5.0 and which can fly in the atmosphere and across the atmosphere. Because of its outstanding performance, aerodynamic heating would clearly affect the structural stiffness, which would result in more complex aerothermoelastic problems, and therefore, it is necessary to develop an aerodynamic-heat-structure coupling analysis method for hypersonic flight vehicles.

Unified hypersonic lifting surface theory can consider both the effects of thickness and upwash by making the best use of both piston theory and classical lifting surface theory, and the method is less affected by the Mach number. Compared with the CFD method, this method is suitable for hypersonic two-way coupling static aeroelasticity analysis due to its similar precision and rapid calculation speed, and aerodynamic models can be changed rapidly. However, thus far, this aerodynamic analysis method has not been applied to a two-way coupling aerothermoelastic analysis.

Combining the aforementioned key technologies, this paper proposes a hypersonic elastic analysis method framework, as shown in figure 1. The main processes and methods are as follows: first, based on the two-way coupling form, the hypersonic aerodynamic forces are solved using unified hypersonic lifting surface theory, and then the aerodynamic heat is calculated by the Eckert reference temperature method. Then, the thermal structure is analyzed by the FEM using the modal method for elastic correction. Finally, the p-k method is used to calculate the flutter speed. A low-aspect ratio wing, as shown in figure 2, is taken as the analysis model in this paper.

With increase in flight time, aerodynamic heating will cause serious heat cumulative effects that can decrease the structural stiffness and flutter speed. The flight trajectory parameters, particularly the combined action of the flight state and flight time, must be given full consideration to meet the design requirements of hypersonic aircraft.

Science China Press Co., Ltd. (SCP) is a scientific journal publishing company of the Chinese Academy of Sciences (CAS). For 60 years, SCP takes its mission to present to the world the best achievements by Chinese scientists on various fields of natural sciences researches. 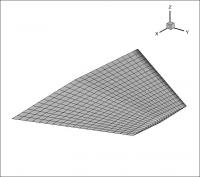