Atrial fibrillation is a heart disorder that affects more than two million Americans, and is considered a key contributor to blood clots and stroke. Now researchers from North Carolina State University are developing a new computerized catheter that could make the surgical treatment of atrial fibrillation faster, cheaper and more effective – while significantly decreasing radiation exposure related to the treatment.

"We are developing a robotic catheter with significantly improved maneuverability and control," says Dr. Gregory Buckner, a professor of mechanical and aerospace engineering at NC State and lead researcher of the team developing the new catheter. "This should reduce the time needed to perform atrial ablation procedures and improve patient outcomes."

Atrial fibrillation occurs when there is random electrical activity in the upper chambers of the heart, the atria. This causes the heart to operate less efficiently, and can lead to lightheadedness and fatigue. It can also lead to blood pooling in the heart, which contributes to blood clots and increased risk of stroke.

Doctors have developed a cardiac ablation technique that mitigates fibrillation by inserting a catheter into the heart and then using extreme heat or cold to create small scars through the walls of the affected atria. These scars block the problematic electrical signals. Throughout this procedure, doctors use X-rays to track the tip of the catheter – exposing the patient and medical personnel to radiation.

Existing commercial catheters are manually controlled and can only move in two directions. These catheters require doctors to painstakingly manipulate the catheter to control exactly where each individual lesion should be applied.

But the robotic catheter developed by Buckner's team significantly reduce operating times, utilizing "smart materials" to provide significantly better maneuverability. The smart materials act as internal muscles, contracting when an electric current is applied. This allows the catheter to bend left, right, up, down or any combination of those directions. Furthermore, doctors can use a specialized joystick to locate key points on the atrium. A computer program can then trace a curve along those points – essentially connecting the dots – creating a solid line of scar tissue that will block the electric signals causing fibrillation.

"If we can reduce the duration of the procedure, it will simultaneously reduce radiation exposure for the patient and medical personnel," Buckner says. "It will also provide cost savings for hospitals and health insurance companies."

The researchers received a Phase II Small Business Innovation Research grant from the National Institutes of Health in August to take their "robotic catheter" prototype from the lab and put it into the hands of doctors. The $1.1 million grant will fund two years of development and surgical testing. Approximately half of these funds will go to NC State, while the remainder will go to Southeast TechInventures, which will help bring the technology to the marketplace.

Other members of Buckner's research team include Dr. Bruce Keene and Dr. Guillaume Chanoit of NC State's College of Veterinary Medicine, and Dr. Salim Idriss, a pediatric electrophysiologist at Duke University Medical Center. Surgical evaluations of their robotic catheter prototypes will begin in 2011.

Other groups have commercialized their own robotic catheter designs, but these require multi-million dollar capital investments and customized catheter laboratories. Buckner's technology could be made available at a fraction of the cost to a larger number of patients due to significant reductions in initial overhead and operational costs, as well as logistical concerns. 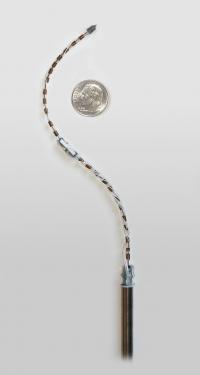