BINGHAMTON, NY - If you don't want to send the wrong message, watch how you punctuate your texts. Text messages that end with a period are perceived to be less sincere than messages that do not, according to newly published research from Binghamton University.

A team of researchers led by Celia Klin, associate professor of psychology and associate dean at Binghamton University's Harpur College, recruited 126 Binghamton undergraduates, who read a series of exchanges that appeared either as text messages or as handwritten notes. In the 16 experimental exchanges, the sender's message contained a statement followed by an invitation phrased as a question (e.g., Dave gave me his extra tickets. Wanna come?). The receiver's response was an affirmative one-word response (Okay, Sure, Yeah, Yup). There were two versions of each experimental exchange: one in which the receiver's response ended with a period and one in which it did not end with any punctuation. Based on the participants' responses, text messages that ended with a period were rated as less sincere than text messages that did not end with a period.

According to Klin, these results indicate that punctuation influences the perceived meaning of text messages. Even though most of the important social and contextual cues were missing, the sincerity of the short messages was evaluated differently depending on the presence or absence of a period.

"Texting is lacking many of the social cues used in actual face-to-face conversations. When speaking, people easily convey social and emotional information with eye gaze, facial expressions, tone of voice, pauses, and so on," said Klin. "People obviously can't use these mechanisms when they are texting. Thus, it makes sense that texters rely on what they have available to them -- emoticons, deliberate misspellings that mimic speech sounds and, according to our data, punctuation."

In some very recent follow-up work, Klin's team found that a text response with an exclamation mark is interpreted as more, rather than less, sincere.

The study, 'Texting insincerely: the role of the period in text messaging,' was published Nov. 22, 2015 in Computers in Human Behavior.

Study: Text messages that end in a period seen as less sincere 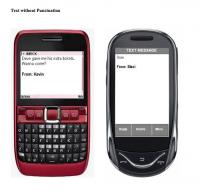