One of the things the human brain naturally excels at is recognizing all sorts of patterns, such as stripes on zebras, shells of turtles, and even the structure of crystals. Thanks to our progress in math and the natural sciences, we are not limited to just seeing the patterns; we can also understand how they readily originate out of pure randomness.

A notable example of different natural patterns with a single mathematical explanation are Turing patterns. Conceived in 1952 by the renowned mathematician Alan Turing, these patterns arise as the solutions to a set of differential equations that describe the diffusion and reaction of chemicals satisfying a few conditions. Going well beyond pure chemistry, Turing demonstrated that such equations explain, to a remarkably precise degree, how spots, stripes, and other types of macroscopic patterns appear spontaneously in nature. Turing patterns also play a role in morphogenesis--the process by which living organisms develop their shape. Surprisingly, the underlying mechanisms behind Turing patterns are preserved across vastly different scales, from centimeters in animal pigmentation to micrometers in purely chemical systems. Does this mean that Turing patterns could be found at the nanometer scale, in the positions of individual atoms?

Associate Professor Yuki Fuseya from the University of Electro-Communications, Japan, has recently found that the answer is a resounding yes! A specialist on bismuth (Bi) and its applications in condensed-matter physics, Dr. Fuseya never imagined working with Turing patterns, which are mostly studied in mathematical biology. However, on noticing some mysterious periodic stripes he had seen in Bi monoatomic layers, Dr. Fuseya got the wild idea they might actually be Turing patterns. And after three years of trial and error, he finally found success!

The finding of the mysterious Bi stripes was serendipitous; the researchers originally intended to produce a Bi monolayer on a niobium diselenide substrate for studying two-dimensional physical phenomena. What they saw was a pattern of stripes with a period of five atoms, or about 1.7 nm, with Y-shaped junctions. These stripes bore a striking resemblance to those found in some species of tropical fish, which naturally arise as one of Turing patterns. Inspired by this observation, Dr. Fuseya's team studied the Bi monolayer problem in more detail from a theoretical standpoint.

The team developed a mathematical model explaining the underlying physical forces in a way that is consistent with the dynamic diffusion-reaction equations that produce Turing patterns. In this model, the interactions between Bi-Bi pairs, Bi and selenium (Se) pairs, and bond angles in Bi-Bi-Bi triplets were considered. The researchers carried out numerical simulations and verified that the generated patterns accurately resembled the previous experimental findings.

These unprecedented findings pave the way towards a new research direction in nanoscale physics that can consider, and even exploit, Turing patterns. "Based on our findings, we may remove undesirable patterns and make perfectly flat thin films, which are crucial for nanoelectronics. On the other hand, we could use Turing patterns as building blocks for new devices to study unexplored areas of physics," highlights Dr. Fuseya. Another attractive aspect of Turing patterns is that they are not static, despite their appearance. Instead, they are in a state of dynamic equilibrium, which means they can "repair" themselves if they are damaged. "We found that Bi, an inorganic solid, is capable of wound healing just like living creatures. This property could lead to new techniques for producing nanoscale devices by combining diffusion and reaction phenomena," remarks Dr. Fuseya.

It is fascinating to think that order can emerge from randomness in the exact same way at scales that are multiple orders of magnitude apart. This study makes it evident how connections are formed in nature at every scale, from the pigmentation of tropical fish to nanoscale crystal growth!

Yuki Fuseya obtained a PhD in science from Osaka University, Japan, in 2004, before joining the University of Electro-Communications as an Associate Professor. He specializes in condensed matter physics, especially the physics of Dirac electrons in solids, spin-orbit interactions, the spin-Hall effect, diamagnetism, and bismuth. Dr. Fuseya has published over 60 peer-reviewed paper and received multiple awards throughout his career, including the Young Scientist's Prize given by the Ministry of Education, Culture, Sports and Technology in Japan. 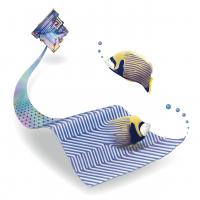