Molecular biologists and bioengineers at the University of California San Diego have unraveled key mechanisms behind the mysteries of aging. They isolated two distinct paths that cells travel during aging and engineered a new way to genetically program these processes to extend lifespan.

The research is described July 17 in the journal Science.

Our lifespans as humans are determined by the aging of our individual cells. To understand whether different cells age at the same rate and by the same cause, the researchers studied aging in the budding yeast Saccharomyces cerevisiae, a tractable model for investigating mechanisms of aging, including the aging paths of skin and stem cells.

The scientists discovered that cells of the same genetic material and within the same environment can age in strikingly distinct ways, their fates unfolding through different molecular and cellular trajectories. Using microfluidics, computer modeling and other techniques, they found that about half of the cells age through a gradual decline in the stability of the nucleolus, a region of nuclear DNA where key components of protein-producing "factories" are synthesized. In contrast, the other half age due to dysfunction of their mitochondria, the energy production units of cells.

The cells embark upon either the nucleolar or mitochondrial path early in life, and follow this "aging route" throughout their entire lifespan through decline and death. At the heart of the controls the researchers found a master circuit that guides these aging processes.

"To understand how cells make these decisions, we identified the molecular processes underlying each aging route and the connections among them, revealing a molecular circuit that controls cell aging, analogous to electric circuits that control home appliances," said Nan Hao, senior author of the study and an associate professor in the Section of Molecular Biology, Division of Biological Sciences.

Having developed a new model of the aging landscape, Hao and his coauthors found they could manipulate and ultimately optimize the aging process. Computer simulations helped the researchers reprogram the master molecular circuit by modifying its DNA, allowing them to genetically create a novel aging route that features a dramatically extended lifespan.

"Our study raises the possibility of rationally designing gene or chemical-based therapies to reprogram how human cells age, with a goal of effectively delaying human aging and extending human healthspan," said Hao.

The researchers will now test their new model in more complex cells and organisms and eventually in human cells to seek similar aging routes. They also plan to test chemical techniques and evaluate how combinations of therapeutics and drug "cocktails" might guide pathways to longevity.

"Much of the work featured in this paper benefits from a strong interdisciplinary team that was assembled," said Biological Sciences Professor of Molecular Biology Lorraine Pillus, one of the study's coauthors. "One great aspect of the team is that we not only do the modeling but we then do the experimentation to determine whether the model is correct or not. These iterative processes are critical for the work that we are doing." 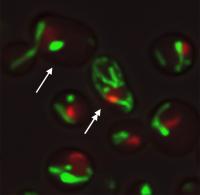