The warming climate has dramatically reduced the size of 39 glaciers in Montana since 1966, some by as much as 85 percent, according to data released by the U.S. Geological Survey and Portland State University. On average, the glaciers have reduced by 39 percent and only 26 glaciers are now larger than 25 acres, which is used as a guideline for deciding if bodies of ice are large enough to be considered glaciers.

The data include scientific information for the 37 named glaciers in Glacier National Park and two glaciers on U.S. Forest Service land. The retreat of glaciers is significant in Montana because of the impact shrinking glaciers can have on tourism, as well as being a visual indicator of mountain ecosystem change in the northern Rocky Mountains.

"The park-wide loss of ice can have ecological effects on aquatic species by changing stream water volume, water temperature and run-off timing in the higher elevations of the park," said lead USGS scientist Dr. Daniel Fagre.

Portland State geologist Andrew G. Fountain partnered with USGS on the project. He said glaciers in mountain ranges throughout the United States and the world have been shrinking for decades.

"While the shrinkage in Montana is more severe than some other places in the U.S., it is in line with trends that have been happening on a global scale," Fountain said.

Scientists used digital maps from aerial photography and satellites to measure the perimeters of the glaciers in late summer when seasonal snow has melted to reveal the extent of the glacial ice. The areas measured are from 1966, 1998, 2005 and 2015/2016, marking approximately 50 years of change in glacier area.

Site visits to glaciers were also made over several years to investigate portions that were covered by rock debris that are difficult to see with digital imagery. The mapped measurements of glaciers complement ground surveys of glaciers using GPS along with repeat photography that involves re-photographing historic photos of glaciers taken early last century when there were an estimated 150 glaciers larger than 25 acres in Glacier National Park.

"Tracking these small alpine glaciers has been instrumental in describing climate change effects on Glacier National Park to park management and the public," said Lisa McKeon, USGS scientist who has been documenting glacier change since 1997.

This information is part of a larger, ongoing USGS glacier study of glaciers in Montana, Alaska and Washington to document mass balance measurements that estimate whether the total amount of ice is increasing or decreasing at a particular glacier. This information helps scientists understand the impact of large scale climate patterns on glaciers in distinctly different mountain environments.

The data for Glacier National Park's named glaciers are available at the USGS ScienceBase website. Additional information about the glacier research can be found at the USGS Northern Rocky Mountain Science Center website and the USGS Benchmark Glacier program website.

This project was funded in part by the USGS Climate and Landuse Change Research and Development Program.

About the Glaciers in Glacier National Park:

Glacier National Park has 37 named glaciers and they are one of the reasons people come to Glacier each year. Last year, 2.9 million visitors came to the park.

Portland State University, offering opportunity to 27,000 students from all backgrounds, is Oregon's only urban public research university. Our mission to "Let Knowledge Serve the City" reflects our dedication to finding creative, sustainable solutions to local and global problems. Follow us on Twitter: @Portland_State 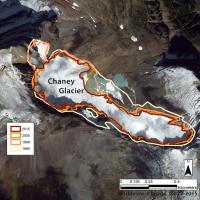