Various specimens of Africa's earliest coelacanth have been found in a 360 million year-old fossil estuary near Grahamstown, in South Africa's Eastern Cape.

More than 30 complete specimens of the new fossil species, Serenichthys kowiensis, were collected from the famous Late Devonian aged Waterloo Farm locality, by palaeontologist Dr Robert Gess and described by him in collaboration with Professor Michael Coates of the University of Chicago.

Gess did the research whilst he was completing his PhD at the Evolutionary Studies Institute at the University of the Witwatersrand. An article describing the new species will be published in the in the prestigious Zoological Journal of the Linnean Society of London on Monday, 21 August.

"Remarkably, all of the delicate whole fish impressions represent juveniles. This suggests that Serenichthys was using a shallow, waterweed-filled embayment of the estuary as a nursery, as many fish do today," says Gess.

The fossils come from black shales originally disturbed by road works at Waterloo Farm. These shales are the petrified compacted remains of mud, which was deposited in the quiet reaches of an estuary not unlike some of those along the Eastern Cape coast today.

"This earliest known record of a coelacanth nursery foreshadows a much younger counterpart, known from the 300 million year old Mazon Creek beds of Illinois in the United States," says Gess.

"This glimpse into the early life history of ancient coelacanths raises further questions about the life history of the modern coelacanth, Latimeria, which is known to bear live young, but whether they, too, are clustered in nurseries remains unknown," explains Coates.

360 million years ago, Africa was part of the southern supercontinent Gondwana, made up of Africa, India, Australia, Antarctica and South America. At that time, the rocks of Waterloo Farm were forming along the shores of the semi-enclosed Agulhas Sea, not far from the South Pole.

Gess originally identified coelacanth remains from the locality whilst carrying out excavations at Waterloo Farm in the mid-1990s under the supervision of Dr Norton Hiller, of the Rhodes University Geology Department. These fossils were not, however, well enough preserved to be reconstructed and described. His painstaking excavation of tons of shale salvaged during subsequent roadworks has now shed light on dozens more specimens, a few of which are preserved in exquisite detail.

These were prepared under a microscope and have allowed the species to be reconstructed in minute detail. They prove to be a new genus and species.

Coelacanths are believed to have arisen during the Devonian Period (about 419.2 ± 3.2 million years ago), however only five species of reconstructable Devonian coelacanths have previously been described, in addition to a number of very fragmentary remains. None of these came from Africa, but rather from North America, Europe, China and Australia. The new species gives important additional information on the early evolution of coelacanths.

"According to our evolutionary analysis (conducted by Gess and Coates), it is the Devonian species that most closely resembles the line leading to modern coelacanths," says Gess.

The new species was discovered a mere 100km from the mouth of the Chalumna River, off which the type specimen of Latimeria chalumnae (the first discovered modern coelacanth) was caught in 1938.

Furthermore, the Geology Department at Rhodes, where Gess was based when he found his first fossil coelacanth, is on the site of the former Chemistry Department where Latimeria was first described. In keeping with the naming of its living relative (after an Eastern Cape river), the species name of the new fossil form, kowiensis, is after the Kowie River which rises among the hills where it was found, and the genus name, Serenichthys, honours Serena Gess, who provided land for the storage of more than 70 tons of black shale rescued from roadworks for ongoing research - in which all the new material was found.

All specimens have been deposited in the palaeontological collection of the Albany Natural History Museum, in Grahamstown, Eastern Cape Province, South Africa. 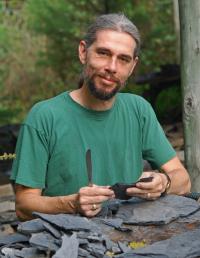