Korea Brain Research Institute (KBRI, President Pann Ghill Suh) announced on May 19 that its research team led by Dr. Jae-Yeol Joo and Dr. Key-Hwan Lim discovered, for the first time in the world, an increased specific expression of the Ube2h gene in the blood of AD patients.

The findings were published in the May Special Issue of the International Journal of Molecular Sciences (IJMS). The title and authors of the paper are as follows:

*Title: Predictive Potential of Circulating Ube2h mRNA as an E2 Ubiquitin-Conjugating Enzyme for Diagnosis or Treatment of Alzheimer's Disease

To maintain homeostasis, our body continually synthesizes and degrades the protein. Once the proteins in a cell reach the end of their lifespan or become deformed, they are marked by ubiquitination* and become degraded by a cell organelle known as a proteasome*. If things go wrong during this process, unnecessary proteins accumulate within cells, causing cancer and other diseases.

* Ubiquitination: A process in which a ubiquitin (a small protein consisting of 76 amino acids) is attached to another protein

* Proteasome: A large protein complex that breaks down proteins in cells

Protein ubiquitination consists of a series of reactions for E1, E2 and E3 enzymes. In particular, there are approximately 40 E2s in the human body. Given that humans have some 30,000 genes as identified by the Human Genome Project, the number of E2s is minuscule, yet this enzyme serves as a crucial gene that controls the degradation of proteins in cells. Recently, there have been reports that the overexpression of E2s is associated with degenerative brain diseases, yet it had been unclear as to which specific enzyme was related to such cases.

The research team analyzed gene expression levels in AD patients using transcriptome analysis, and identified an increased specific expression of the Ube2h* gene (a subfamily of E2 enzymes) in their blood. The same phenomenon was also identified in the blood of AD model mouse.

This study is significant in that it has identified the correlation between ubiquitination enzymes and degenerative brain diseases while suggesting a new biomarker for the diagnosis of AD and dementia. Currently, a patent has been filed for an AD diagnosis and treatment method featuring the detection of the Ube2h gene. In the future, the research team will transfer this technology to companies to facilitate the development of dementia diagnosis kits that utilize the Ube2h gene in blood as a biomarker.

"We are working to discover AD-specific genes using next-generation sequencing (NGS) and to make use of such findings by establishing a big data set, said Dr. Jae-Yeol Joo, a senior researcher at KBRI. "For the research community, we will provide a platform for follow-up research. For industry, we hope our technology can be applied to ensure the quick and precise diagnosis and treatment of dementia."

Discovery of a new biomarker for Alzheimer's sisease (AD) 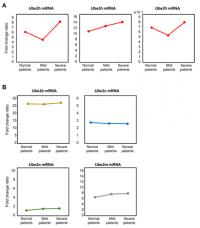