Porous silicon manufactured in a bottom up procedure using solar energy can be used to generate hydrogen from water, according to a team of Penn State mechanical engineers, who also see applications for batteries, biosensors and optical electronics as outlets for this new material.

The surface area of this porous silicon is high," said Donghai Wang, assistant professor of mechanical engineering. "It is widely used and has a lot of applications."

The standard method for manufacturing porous silicon is a subtraction method, similar to making a sculpture.

"Silicon is an important material because it is a semiconductor," said Wang. "Typically, porous silicon is produced by etching, a process in which lots of material is lost."

Wang's team uses a chemically based method that builds up the material rather than removing it. The researchers start with silicon tetrachloride, a very inexpensive source of silicon. They then treat the material with a sodium potassium alloy.

"The bonds between silicon and chlorine in silicon tetrachloride are very strong and require a highly reducing agent," said Wang. "Sodium potassium alloy is such an agent."

Once the bonds break, the chlorine binds with the sodium, potassium and silicon, potassium chloride and sodium chloride -- table salt -- become solid, forming a material composed of crystals of salt embedded in silicon. The material is then heat-treated and washed in water to dissolve the salt, leaving pores that range from 5 to 15 nanometers. The researchers report their results in today's (Apr. 10) issue of Nature Communications.

Because sodium potassium alloy is highly reactive, the entire procedure must be done away from the oxygen in the air, so the researchers carry out their reaction in an argon atmosphere.

"I believe that the process can be scaled up to manufacturing size," said Wang. "There are some processes that use sodium potassium alloy at industrial levels. So we can adapt their approaches to make this new type of porositic silicon."

Because these silicon particles have lots of pores, they have a large surface area and act as an effective catalyst when sunlight shines on this porous silicon and water. The energy in sunlight can excite an electron that then reduces water, generating hydrogen gas. This process is aided by the material's larger-than-normal band gap, which comes from the nanoscale size of the silicon crystallites.

"This porous silicon can generate a good amount of hydrogen just from sunlight," said Wang.

The researchers are also looking into using this porous silicon as the anode in a lithium ion battery.

The U.S. Department of Energy and the Defense Threat Reduction Agency funded this work. 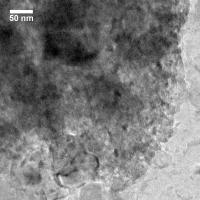 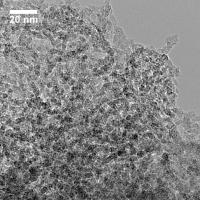