In a rare coincidence, researchers working in both Turkey and Iran discovered on the same day how a rare species of bee builds its underground nests. The females from the solitary species Osima (Ozbekosima) avoseta line the nest's brood chambers with petals of pink, yellow, blue, and purple flowers. The chambers provide nutrients for the larvae to grow and mature and protect the next generation as they wait out the winter. The new research was published this February in American Museum Novitates.

"It was absolute synchronicity that we all discovered this uncommon behavior on the same day," says Jerome Rozen, curator in the Division of Invertebrate Zoology at the American Museum of Natural History. Rozen and colleagues were working near Antalya, Turkey while another group of researchers were in the field in Fars Province, Iran. "I'm very proud of the fact that so many authors contributed to this paper."

Bees are the most important animal pollinators living today, and many flowering plants depend on bees to reproduce. But nearly 75% of bee species—and there are about 20,000 species described—are solitary. This means that for the majority of bees, a female constructs a nest for herself and provisions each chamber in the nest with food for the larval stage of her brood. When each chamber is ready, the female deposits an egg and closes the nest if there is only one chamber to a nest. The nests—found in the open in the ground—need to be protected from any number of potential threats to their physical structure like compaction of the soil, desiccation, or excessive heating. The survival of solitary bee species also depends on protection from molds, viruses, bacteria, parasites, and predators.

In O. avosetta, the female builds a nest in one or two vertical chambers close to the surface, or between 1.5 and 5 cm below ground. Entering from the top, the adult female lines each chamber with overlapping petals, starting at the bottom. The female then ferries claylike mud to the nest, plasters a thin layer (about 0.5 mm thick) on the petals, and finishes the lining with another layer of petals. The nest is essentially a petal sandwich, built in the dark.

When the physical structure is ready, female O. avosetta gather provisions of a sticky mix of nectar and pollen and place it on the chamber's floor. An egg is deposited on its surface, and the chamber is closed by carefully folding the petals at the top. The nest is capped with a plug of mud, sealing the young bee in a humid chamber that becomes rigid and protects the larvae as it eats its rations, spins a cocoon, and falls into a 10-month sleep until spring. The nests of the species can be parasitized by a wasp that lays an egg in the brood chamber and kills the O. avosetta egg with enlarged jaws and then devours the provisions.

"In this species, a female shingles the wall of her brood chambers with large pieces of petals or with whole petals, often of many hues," says Rozen. "Unfortunately, her larvae never enjoy the brilliant colors of the nest's walls because they have no eyes—and, anyhow, they would need a flashlight!"

Bees that nest in petals 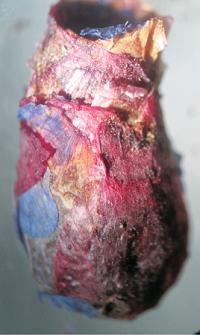 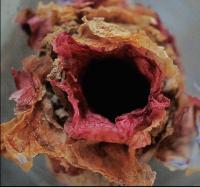