"No single molecular imaging modality provides a perfect diagnosis. Our nanoplatform is designed to enable multimodal molecular imaging, thus overcoming the intrinsic limitations of each single image modality while maximising their advantages", noted Marco Filice, a researcher in the Department of Chemistry and Pharmaceutical Sciences at the Complutense University of Madrid and the director of the study.

The platform, which has been tested on mice, targets solid cancers such as sarcomas. However, "due to its flexibility, the proposed nanoplatform can be modified, and with a suitable design of recognition element siting, it will be possible to expand detection to more types of cancer", Filice continued.

Besides the Complutense University, the present research involved the Carlos III Foundation National Centre for Cardiovascular Research, the CIBER of Respiratory Diseases, the Centre for Cooperative Research in Biomaterials and the Ikerbasque Basque Foundation for Science.

Two faces of iron and gold

Named after the Roman god Janus, usually depicted as having two faces, these nanoparticles also "have two opposing faces, one of iron oxide embedded in a silica matrix that serves as a contrast medium for MRI and another of gold for CT'", explained Alfredo Sánchez, a researcher in the UCM Department of Analytical Chemistry and the first author of the study.

In addition, a molecular probe sited in a specific manner in the golden area permits fluorescence optical imaging while a peptide selective for hyperexpressed receptors in tumours (RGD sequence) and sited on the silica surface enveloping the iron oxide nanoparticles identifies the tumour and makes it possible to direct and transport the nanoplatform to its target.

Once the research team had synthesised the nanoparticles and determined their characteristics and toxicity, they then tested them in mouse models reared to present a fibrosarcoma in the right leg. The nanoparticle was injected in the tail, and "excellent imaging results were obtained for each modality tested", reported Filice.

Although there is still much to do before these experiments can be applied to humans, this research shows that personalised treatment "is closer than ever to becoming a reality, thanks to nanotechnology and biotechnology", Filice concluded. 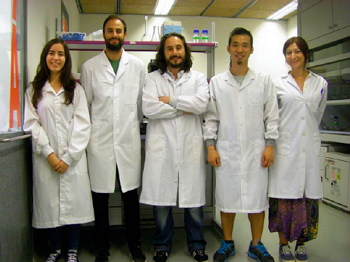