A new report from the Wildlife Conservation Society Canada (WCS Canada) creates a conservation strategy that will promote wildlife resiliency in the Southern Canadian Rockies to the future impacts of climate change and road use. The report's "safe passages and safe havens" were informed in part by an assessment of six iconic species—bull trout, westslope cutthroat trout, grizzly bears, wolverines, mountain goats and bighorn sheep—five of which were ranked as highly vulnerable to projected changes.

Nestled between Glacier National Park in Montana and Banff National Park in Canada, the Southern Canadian Rockies (SCR) has been overshadowed by these towering icons of mountain splendour. Yet this southern section contains spectacular landscapes, supports one of the most diverse communities of carnivores and hoofed mammals in North America, and is a stronghold for the six vulnerable species that have been vanquished in much of their former range further south.

In the report entitled Safe Havens, Safe Passages for Vulnerable Fish and Wildlife: Critical Landscapes in the Southern Canadian Rockies British Columbia and Montana, WCS Conservation Scientist John Weaver notes that wildlife will need 'room to roam' to adapt to the impacts of climate change. Complicating those climate-related transitions are major highways and an expansive network of forest roads that have fragmented the SRC landscape.

"Providing 'safe havens' of secure and diverse habitats and 'safe passages' across the highways are climate-smart strategies," says Weaver.

To that end, he assessed 16,978 square kilometres (6,632 square miles) of SCR land for conservation value based upon the needs of the vulnerable species and the myriad challenges facing each. For example, warmer winter temperatures resulting from climate change will reduce mountain snow cover and suitable habitat for the rare wolverine, a species highly adapted to persistent snow pack. Reduced stream flow and warmer stream temperatures will diminish habitat for westslope cutthroat trout, a native fish adapted well to cold waters, while favouring introduced rainbow trout and hybrids of the two species.

Weaver recommends a portfolio of conservation lands including a 'Southern Canadian Rockies Wildlife Management Area' (WMA) that would conserve 66% of key habitats on 54% of its land base. The WMA designation would emphasize fish and wildlife values while allowing other responsible land uses. The trans-border Flathead River basin adjacent to Waterton Lakes-Glacier National International Peace Parks also merits very strong conservation consideration, says Weaver, due to its remarkable biological diversity. He endorses a new National or Provincial Park on the B.C. side and Wilderness areas on the Montana side.

Weaver goes on to identify safe havens not only important to wildlife today but that also provide a range of elevations and diverse topography for animals to relocate to in the future. To facilitate movement options for wildlife, the report maps nine suitable crossing locations along busy Highway 3 in British Columbia and 16 mountain passes that provide important wildlife connectivity across the Continental Divide between Alberta and British Columbia.

"This report will help inform discussions and decisions about land and resource management in the Southern Canadian Rockies of British Columbia and Montana," said Weaver. "These spectacular landscapes provide some of the best remaining strongholds for a suite of vulnerable fish and wildlife. Protecting designated lands for conservation will help ensure that this rich diversity of fish and wildlife will be enjoyed by generations yet to follow."

To see a complete copy of John Weaver's report, please go to wcscanada.org. 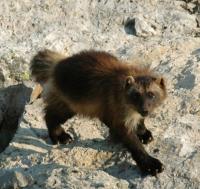