TALLAHASSEE, Fla. -- Carbon, held in frozen permafrost soils for tens of thousands of years, is being released as Arctic regions of the Earth warm and is further fueling global climate change, according to a Florida State University researcher.

Assistant Professor of Oceanography Robert Spencer writes in Geophysical Research Letters that single-cell organisms called microbes are rapidly devouring the ancient carbon being released from thawing permafrost soil and ultimately releasing it back into the atmosphere as carbon dioxide. Increased carbon dioxide levels, of course, cause the Earth to warm and accelerate thawing.

"When you have a huge frozen store of carbon and it's thawing, we have some big questions," said Robert Spencer, assistant professor of oceanography. "The primary question is when it thaws, what happens to it? Our research shows this ancient carbon is rapidly utilized by microbes and transferred to the atmosphere, leading to further warming in the region and therefore more thawing. So we get into a runaway effect."

Spencer and a team of researchers first began looking at this issue of what happened to the carbon as permafrost thawed several years ago. There was a gap in the scientific literature because terrestrial scientists had found that permafrost was thawing and thus releasing long-stored carbon. But, aquatic scientists found no evidence of that ancient carbon at the mouths of major rivers leading to the Arctic Ocean.

So, where did the carbon go?

The simple answer is that it became food.

The more complex answer provides an interesting glimpse into how some of the smallest living organisms can have a major effect on the planet. Microbes, single-cell organisms that are too small for the human eye to see, are the oldest form of life on Earth and carbon is a rich food source for them.

Scientists weren't finding carbon at the mouth of major Arctic rivers because it was already consumed and released into the atmosphere.

"This material is very attractive to these microbes as a food source," Spencer said. "As permafrost thaws, microbes are going to use this carbon with clear ramifications for climate change."

To conduct this study, Spencer led a team of researchers who spent more than three months between 2012 and 2014 studying thawing permafrost in Siberia. Permafrost in the region is extremely deep -- more than 100 feet in some places -- and has remained frozen for tens of thousands of years.

At 19 different sites in the Siberia region, Spencer and his colleagues collected hundreds of water samples and conducted experiments to determine what portion of the carbon pool microbes were using as a food source -- the ancient carbon coming from the thawed permafrost or new sources.

Spencer acknowledged it is exceptionally difficult for scientists to capture that process in real time, but future research will take his team to small streams dominated by permafrost thaw to see if they could quantify permafrost carbon inputs before microbes gobble it up.

"We have to capture this material as soon as it thaws because that's where we see its unique compositional features which make it so attractive to microbes," he said.

Spencer's research is funded by the National Science Foundation. Other institutions contributing to the research are Northumbria University in the United Kingdom, University of Oldenburg in Germany, ETH Zurich in Switzerland, Woods Hole Research Center in Massachusetts, the Russian Academy of Science and the University of Georgia.

Geophysical Research Letters is published by the American Geophysical Union in Washington, D.C. 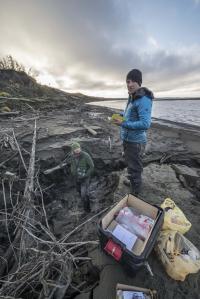