(Santa Barbara, Calif.) –– Sunscreens, lotions, and cosmetics contain tiny metal nanoparticles that wash down the drain at the end of the day, or are discharged after manufacturing. Those nanoparticles eventually end up in agricultural soil, which is a cause for concern, according to a group of environmental scientists that recently carried out the first major study of soybeans grown in soil contaminated by two manufactured nanomaterials (MNMs).

The team was led by scientists at UC Santa Barbara's Bren School of Environmental Science & Management. The team is also affiliated with the UC Center for Environmental Implications of Nanotechnology (CEIN), a $24 million collaboration based at UCLA, with researchers from UCSB, UC Davis, UC Riverside, University of Texas at El Paso, Columbia University, and other national and international partners. The results of the study are published this week in the Proceedings of the National Academy of Sciences.

"Our society has become more environmentally aware in the last few decades, and that results in our government and scientists asking questions about the safety of new types of chemical ingredients," said senior author Patricia Holden, a professor with the Bren School. "That's reflected by this type of research."

She explained that the research, which is funded by the National Science Foundation (NSF) and the U.S. Environmental Protection Agency (EPA), is helping to discover potential environmental implications of a new industry that includes nanomaterials. The ultimate goal is to help find more environmentally compatible substitutes, Holden said.

Soybean was chosen for the study due to its importance as a food crop –– it is the fifth largest crop in global agricultural production and second in the U.S. –– and because it is vulnerable to MNMs. The findings showed that crop yield and quality are affected by the addition of MNMs to the soil.

The scientists studied the effects of two common nanoparticles, zinc oxide and cerium oxide, on soybeans grown in soil in greenhouses. Zinc oxide is used in cosmetics, lotions, and sunscreens. Cerium oxide is used as an ingredient in catalytic converters to minimize carbon monoxide production, and in fuel to increase fuel combustion. Cerium can enter soil through the atmosphere when fuel additives are released with diesel fuel combustion.

The scientists noted that the EPA requires pretreatment programs to limit direct industrial metal discharge into publicly owned wastewater treatment plants. However, the research team conveyed that "MNMs –– while measurable in the wastewater treatment plant systems –– are neither monitored nor regulated, have a high affinity for activated sludge bacteria, and thus concentrate in biosolids."

The authors pointed out that soybean crops are farmed with equipment powered by fossil fuels, and thus MNMs can also be deposited into the soil through exhaust.

The study showed that soybean plants grown in soil that contained zinc oxide bioaccumulated zinc; they absorbed it into the stems, leaves, and beans. Food quality was affected, although it may not be harmful to humans to eat the soybeans if the zinc is in the form of ions or salts, in the plants, according to Holden.

In the case of cerium oxide, the nanoparticles did not bioaccumulate, but plant growth was stunted. Changes occurred in the root nodules, where symbiotic bacteria normally accumulate and convert atmospheric nitrogen into ammonium, which fertilizes the plant. The changes in the root nodules indicate that greater use of synthetic fertilizers might be necessary with the buildup of MNMs in the soil.

Holden commented on the likelihood of high concentrations of these nanoparticles in agriculture: "There could be hotspots, places where you have accumulation, including near manufacturing sites where the materials are being made, or if there are spills. We have very limited information about the quantity or state of these synthetic nanomaterials in the environment right now. We know they're being used in consumer goods, and we know they're going down the drain." 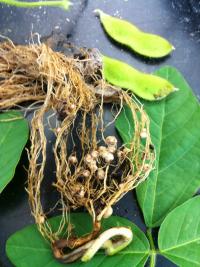