(Santa Barbara, Calif.) –– While an international seed bank in a Norwegian island has been gathering news about its agricultural collection, a group of U.S. scientists has just published an article outlining a different kind of seed bank, one that proposes the gathering of wild species –– at intervals in the future –– effectively capturing evolution in action.

In the October issue of Bioscience, Steven J. Franks of Fordham University, Susan J. Mazer of the University of California, Santa Barbara, and a group of colleagues, have proposed a method of collecting and storing seeds of natural plant populations. They argue for the collection of many species in a way that evolutionary responses to future changes in climate can be detected. They call it the "Resurrection Initiative."

"In contrast to existing seed banks, which exist primarily for conservation, this collection would be for research that would allow a greater understanding of evolution," said Franks.

"This seed collection would form an important resource that can be used for many types of research, just as GenBank –– the collection of genetic sequences and information –– forms a key resource for research in genetics and genomics," said Franks.

"Typically, seed banks are focused on the preservation of agricultural species or other plant species of strong economic interest, say, forest species, forest trees," said Mazer. This is to make sure that scientists can maintain a genetically diverse seed pool in the event of some kind of ecological calamity that requires the replenishing of seeds from a certain part of the world or from certain species. "But that implies a relatively static view of a seed bank, a snapshot forever of what a species provides."

Evolutionary biologists recognize that the gene pool of any species is a dynamic resource that changes over time as a result of random events such as highly destructive climatic events like hurricanes, but also through sustained and ongoing processes like evolution by natural selection.

While most scientists agree that the climate is changing, the extent to which species will be able to evolve to keep up with these changes is unknown.

According to the article, the only way that scientists can detect the results of those sorts of calamitous changes –– and test evolutionary predictions about what sorts of changes might occur over time –– is to sample seed banks in a repeated fashion. Then they must compare the attributes of the gene pools that are sampled at different times to a baseline.

"One way that we can obtain this baseline is by collecting seeds at a given point in time and archiving them under ideal environmental conditions, so that they all stay alive, and so that 10, 20, and 30 years down the road, we can compare them to seeds that we collect in the future to see how the gene pool has changed," explained Mazer.

This approach will allow a number of things that a one-time, seed-sampling event doesn't. Scientists can evaluate the result of the effects of climate change, land use change, and other kinds of environmental changes such as the spread of disease on the gene pool.

"Currently seed banks don't allow this for a couple of reasons," said Mazer. "First, they focus on species that have been under cultivation for a long period. Species that have been under cultivation have relatively low levels of genetic variation –– because we have been selecting them only for the attributes that we want. Wild species, by contrast, contain a high degree of genetic variation in almost any trait that we might examine."

Agricultural species are often selected to have a predictable flowering time, a predictable seed size –– and a predictable degree of tolerance for drought, salt, or heavy metals. By contrast, wild species retain a much greater degree of genetic diversity in all of these traits.

Mazer explained that scientists don't know whether or not the environmental changes that are ongoing, due to changes in climate or land use practices, are reducing the amount of genetic variation in the wild. If they are, the only way it can be detected will be by sampling representative seeds from a large number of populations at very regular intervals.

"The approach that we would use is not simply to collect seeds over various time intervals and to archive them, but in the future to raise them in a common environment comparing seeds that were collected in 2010, 2030, and 2050, for example," said Mazer. "If we found, for example, that the plants that come from seeds that were collected 50 years from now flower much earlier than those that were collected today, we could logically infer that natural selection over 50 years had favored plants, that is genotypes that flowered earlier and earlier, relative to those that delayed flowering."

Mazer explained that scientists and the public have been thrilled recently by an increase in the understanding of the value of seed banks, and in particular with the seed bank that is underway in Norway, called the Svalbard Global Seed Vault, on the island of Spitsbergen.

"However, that kind of seed bank doesn't finish the job," said Mazer. "The Norwegian seed bank is planning to preserve hundreds of thousands of varieties of agricultural plant species, but most of those samples represent only a tiny fraction of that which you would find in a wild population of a wild species." Nor does it allow for insights into the evolutionary process, enabled by the combination of seed banking and subsequent raising of plants as proposed by the "Resurrection Initiative."

Scientists propose the creation of a new type of seed bank 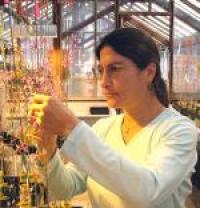