Sea creatures have evolved over millions of years to maximise efficiency of movement through water; humans have been trying to perfect streamlined designs for barely a century. So shouldn't we be taking more notice of the experts? Biologists and engineers from across the US have been doing just that. By studying the flippers, fins and tails of whales and dolphins, these scientists have discovered some features of their structure that contradict long-held engineering theories. Dr Frank Fish (West Chester University) will talk about the exciting impact that these discoveries may have on traditional industrial designs on Tuesday 8th July at the Society for Experimental Biology's Annual Meeting in Marseille [Session A2].

Some of his observations are already being applied to real life engineering problems, a concept known as biomimetics. The shape of whale flippers with one bumpy edge has inspired the creation of a completely novel design for wind turbine blades. This design has been shown to be more efficient and also quieter, but defies traditional engineering theories. "Engineers have previously tried to ensure steady flow patterns on rigid and simple lifting surfaces, such as wings. The lesson from biomimicry is that unsteady flow and complex shapes can increase lift, reduce drag and delay 'stall', a dramatic and abrupt loss of lift, beyond what existing engineered systems can accomplish," Dr Fish advises. "There are even possibilities that this technology could be applied to aeronautical designs such as helicopter blades in the future."

The work centres on studies of vortices, tornado-shaped water formations that develop in the wake of the animals. "In the case of the humpback whale, vortices formed from tubercles (bumps) on the front edge of flippers help to generate more lift without the occurrence of stall, as well as enhancing manoeuvrability and agility," explains Dr Fish. "In the case of the tails of dolphins, vortices are formed at the end of the up and down strokes. These vortices are involved in the production of a jet in the wake of the dolphin that produces high thrust. By regulating the production of the vortices, the dolphin can maximize its efficiency while swimming."

This work will be presented at 13.10pm on Tuesday 8th July at the Society for Experimental Biology's Annual Meeting (6th – 10th July 2008) at Parc Chanot, Marseille, France.

Journalists are welcome to attend the meeting. For full details of the programme please visit: http://www.sebiology.org/meetings/Marseille/Programme_by_day.html 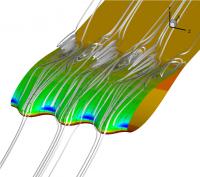